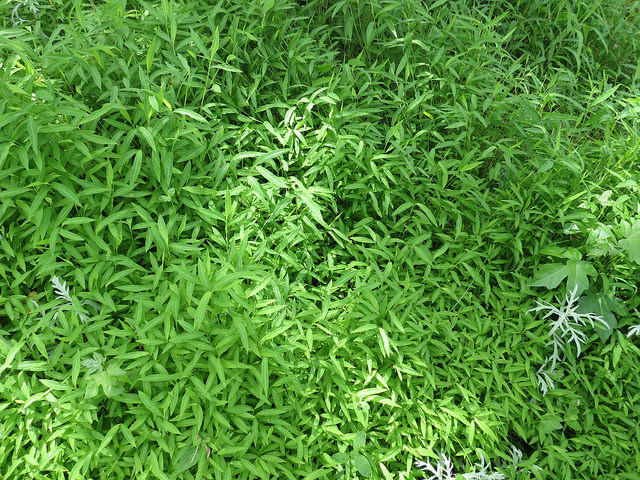 Japanese Stiltgrass taking over a yard

Invasive plants such as English ivy and privet are not originally from North America. They have escaped cultivation and now overrun native vegetation. The list in our brochure represents the invasive species that we have seen most often on our certification site visits. We ask that property owners remove invasives considered as Severe or Significant Threats by the North Carolina Native Plant Society to achieve Bird Friendly Habitat certification. To be certified, invasive plants cannot cover more than 15% of the property.

We have imported many of the common plants that you see in neighborhood gardens based largely on their value as ornamental, lawn and garden plants. Thus native plants have been displaced as land has been developed. While some non-native plants stay within the confines of our gardens and can be used as decorative and ornamental species, they do not offer much value for wildlife especially since they do not host the insects which are an essential part of an intact and bird-friendly ecosystem.

Other imported, non-native plants readily and aggressively spread outside their original boundaries displacing native plants and becoming serious threats to ecosystems such as wetlands and the wildlife that depends on them. Most people don’t even realize that commonly seen plants like Bradford Pear trees, Chinese Privet, Japanese Honeysuckle, and Nandina are non-native and have become serious invasive threats.

The North Carolina Botanical Garden has written a very helpful booklet, “Controlling Invasive Plants,” which New Hope Audubon recommends. We gave them a grant to reprint it in the spring of 2020 to make it more widely available.

Other invasive plant lists and resources