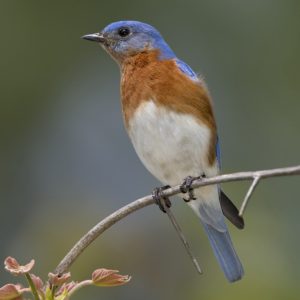 With the presentation of our newly revised and updated website, New Hope Audubon has decided to change our logo to an Eastern Bluebird. And to inaugurate our new blog, it seemed fitting to include a piece on this familiar bird that exemplifies so much of what we strive for in our mission.

Bluebirds are one of the iconic species in the hearts and minds of all Americans. They are beautiful in their dazzling blue, orange, and white plumage. They are easy to see in their preference for open habitat, often perching on low branches or power lines in our neighborhoods and backyards. And as hole-nesters, they readily accept our offering of nest boxes. Their scientific name, Sialia sialis, derived from Greek, simply means ‘a kind of bird.’ How fitting! Who doesn’t love a bluebird?

Happily, for those of us who live in the piedmont region of North Carolina, bluebirds are fairly common in the right habitat. Drive down any country road through farmland, and you are likely to see bluebirds. In the spring, you may see mated pairs sitting on telephone wires or fence lines. As summer progresses and babies are born, you may see family groups. And in the fall and winter, the numbers swell even further as our resident birds are joined by bluebirds moving south from further north.

Bluebirds are insectivorous and frugivorous. Most people know that insectivorous means that they eat bugs. Frugivorous (nice word, don’t you think?) means that they also eat fruit. This is particularly true for bluebirds in the fall and winter when fruits like wild grapes and dogwood berries are abundant and insects are harder to find. As insectivores, bluebirds are different from other bug eaters like flycatchers, warblers, or woodpeckers. Instead of sallying out from a perch to snatch a flying insect in the air like a flycatcher or digging into a tree like a woodpecker, bluebirds specialize in eating insects that live on the ground. Perhaps this belies their being in the thrush family, most of whom are also ground feeders. But instead of hopping around on the ground like robins, they perch on a tree limb or telephone line in a characteristically ‘hunched over’ posture, scanning the ground for some creepy-crawly morsel moving around in the grass. Like hawks, they must have pretty good eyesight to see their tiny prey from above. When they do find something, they fly down and snatch their meal from the tangle of vegetation.

There are many blue birds in the world, but there is no blue pigment in any of their feathers. Unlike many other feather colors (yellows, reds, greens, etc.) that get their color from chemical pigments, blue feathers get their color structurally. That is, they act like prisms, separating the white light that hits them and reflecting the blue back to us.  The photo at the top of the page shows a male bluebird in all his stunning blueness. The light is hitting him in such a way that it reflects the intense blue wavelengths back to the camera (or our eyes). The photo below shows a bluebird with the light coming from behind it. That ‘transmitted’ light is not changed by the feather structure, and so the ‘blue’ instead looks gray. 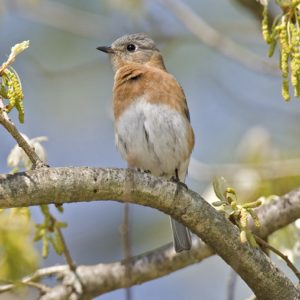 It was long thought that bluebirds were monogamous, with mated pairs staying together for life. And scientists have found evidence that adult offspring of a pair sometimes ‘help’ raise their parents’ later broods. This monogamy and cooperative breeding appealed to American sensibilities of stable family life. However, it is now known through DNA analysis, that ‘monogamous’ females do breed with other males besides their mates. So the male in the family may actually be helping to raise young that are not his biological offspring. And females occasionally lay their eggs in the nests of other bluebird pairs (called egg dumping), so some females also raise babies who are not their own. In addition, bluebirds have often been portrayed as sweet and gentle. Their song is soft and pleasant, and both males and females sing. Well, that picture of peace and tranquility is not really true. Both males and females will fight with interlopers in order to defend their territories and nest cavities, wounding and even killing their opponents. So much for the “Bluebird of Happiness” and “Somewhere over the rainbow, bluebirds fly” from the Wizard of Oz. Sorry if I burst your bubble.

On the other hand, in the conservation movement, bluebirds are a success story. Their numbers declined during the first half of the 20th century as a result of pesticides, invasive bird species, and changes in land use practices. Pesticides like DDT sickened or even killed bluebirds outright. When these pesticides are sprayed on fields, they settle to the ground and weaken or kill insect agricultural pests. Unfortunately, when bluebirds eat those weakened insects, the pesticides build up in their bodies and eventually weaken or kill them, too. In nature, tree holes can be in short supply, and thus, hole-nesting species are often in competition for select sites. With the introduction of European Starlings and House Sparrows, bluebirds found themselves in competition with two formidable and aggressive hole-nesting species. The bluebird numbers declined precipitously as a result. 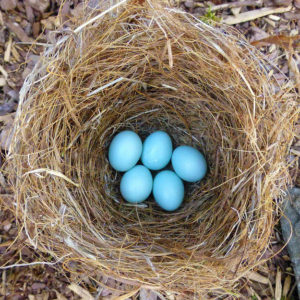 Changes in land use practices present a different story. Eastern Bluebirds probably thrived in open forests like the longleaf pine savannahs that dominated much of the southeastern United States. But as those forests were clear cut and replaced with densely planted loblolly pine plantations, the open spaces needed by the bluebirds became more scarce. In more recent years, however, as the human population has increased, we have re-created more open spaces in our neighborhoods and farmlands. That is good for bluebirds, except for one thing. We tend not to like having old trees (with their tree holes) around because they present a hazard when they inevitably fall down. No tree holes, no places for bluebirds to nest. Luckily for the birds, however, people like our neighbors in Warrenton, NC, the Eastern Bluebird Rescue Group, led by Frank Newell, have been making artificial nest boxes at a prodigious rate. At last count, they have made more than 265,000 bird houses since 1989! (You can buy one from us here, if you’d like.) 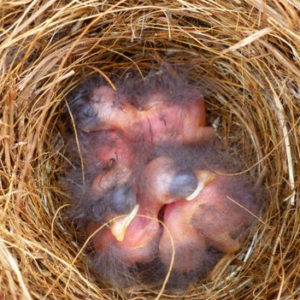 While they may not be the exemplars of peace and tranquility we would like, bluebirds are certainly beautiful and their singing is sweet, indeed. And they do eat lots of insects. Honor them, enjoy them, and put up a bluebird house if you can.

[The above material was gleaned from: The Birds of North America and Wikipedia.]