A Florida and Georgia Trip Report

In March 2021, Vern Bothwell asked if I wanted to go on a birding trip, maybe to Florida; my immediate response was “I’m in.”  Gail Boyarsky and Clarke French also joined us.  We wanted to see a few specific birds and look for lifers, but we also wanted to see new places and start our post-pandemic lives. We were also thinking we would see some migrants returning north.

Gail and Clarke couldn’t join us on the way there, so Vern and I left early on April 17 in our rented vehicle (one big enough to hold all of us) and drove toward Georgia.  We wanted to work on our Georgia bird lists.  Although we went to the Georgia side of the Savannah National Wildlife Refuge (NWR) and Jekyll Island, we spent most of our birding time at Harris Neck NWR (near South Newport, GA).  Vern had been there before and raved about the birding.  We saw a lot of species, such as Painted Buntings, more than 200 Wood Storks, many waders, and many species on nests and/or feeding chicks.  We took a lot of photos.  We also started seeing many butterflies and I saw two life species (Viola’s Wood Satyr and Saltmarsh Skipper) in Georgia. 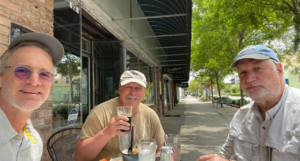 The second day, we met up with our old friend Steve Buczynski (who had moved from Durham, NC to Clewiston, FL) for birding at Merritt Island NWR (near Titusville, FL). It was on our way south into Florida and was highly recommended.  We saw many waders here, including several Reddish Egrets doing their dances to find food.  Afterwards, we enjoyed a nice lunch at a microbrewery in Titusville.  Although it was kind of far from there, we decided to try Lake Apopka Wildlife Drive, just west of Orlando next. We got there after it had closed, but we walked in and saw a lot of birds including a Sora, Fulvous Whistling-Ducks, and Palm Warblers.  There were lots of Common Gallinules with chicks.  A little later, we drove to another park on the south shore of Lake Apopka.  We got very good looks at Purple Gallinules and Limpkins.  We drove down to spend the night in West Palm Beach, FL where we would meet up with Gail who was flying in that night. 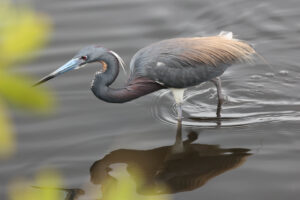 I had picked a La Quinta for our stay in West Palm Beach which turned out to be not so nice.  We spent two nights there.  My fellow travelers didn’t let me pick any more motels during our trip.  The next day we spent most of our day close by in Boynton Beach at Loxahatchee NWR, Wakodahatchee Wetlands, and Green Cay Wetlands. Steve drove over from Clewiston to join us as well.  At Loxahatchee NWR, Gail found us a Gray Kingbird, but we missed Snail Kites.  We saw many waders, such as Great Egrets, Great Blue Herons, Tricolored Herons, and more, in their breeding plumage. At the wetlands, many were nesting and were very close to the boardwalks, so we took lots of photos. By the way, Wood Stork, Green Heron, and Anhinga chicks are not cute. We also saw the first of many Black-bellied Whistling-Ducks. We also saw migrating warblers, such as Cape May and Black-and-white Warblers, at several of these wetlands.  Clarke flew in and he joined us for dinner. 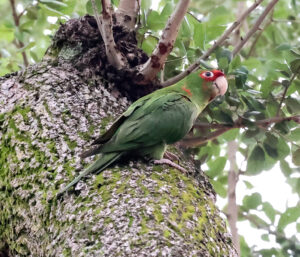 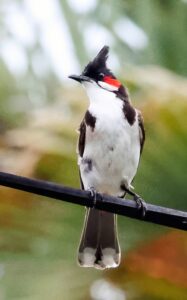 The next day we arose early and headed south toward Miami, stopping in Boca Raton. We were looking for a Bahama Mockingbird that had been there for a while, but we missed it. We spent the rest of the day mostly looking for introduced birds, like Scaly-breasted Munias, Mitred Parakeet, Spot-breasted Oriole (found by Clarke while we were looking at a Red-whiskered Bulbul), Egyptian Goose, and others, in South Miami and Kendall. We also went to a Cave Swallow colony along a canal where we saw many Cave Swallows. We then headed toward Key Largo where we found a nice place to stay, and we had a very nice dinner at a local seafood restaurant.  We enjoyed the motel and dinner so much that we stayed there, and we ate at the same restaurant the next night.

The next day we headed down the Florida Keys toward Key West.  We stopped along the way at several parks where we saw some migrating shorebirds, such as Short-billed Dowitchers, Black-bellied Plovers, and Spotted Sandpipers. We stopped at Big Pine Key to look for a Black-faced Grassquit, which is very rare in the United States, that had been reported.  We didn’t see it but did see a diminutive Key Deer (a subspecies of White-tailed Deer) and a Florida Duskywing (life butterfly).  We drove on to Key West to Ft. Zachary Taylor State Park, the southernmost point in the continental U.S.  Vern found a Fork-tailed Flycatcher (also rare for the U.S.) which was seen by us and a few others but left after a short while and not seen again.  We found White-crowned Pigeons and several other trip birds such as Yellow-billed Cuckoo, Common Ground Dove, and Blue Grosbeak.  It was odd seeing all the chickens (Red Junglefowl) that are established at Key West.  In the afternoon, we headed back north toward Key Largo.  We stopped again briefly to look for the Black-faced Grassquit but missed it again.  We left and drove up the coast a bit, but the group decided we should return to Big Pine Key, and Gail eventually found the grassquit. When she found it, it was so close that she almost stepped on it! Third time’s a charm!  On the way back, we also saw a Great White Heron (a color morph of the Great Blue Heron) and Common Mynahs.  We also learned the meaning of hangry (hungry and angry). 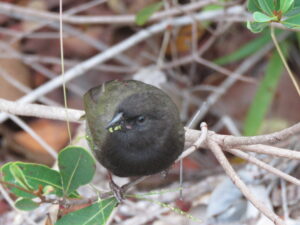 The next day, we drove to the Everglades National Park which was new for some and filled with delightful birds. We saw a White-tailed Kite outside the park entrance.  At the Royal Palms Visitor Center, we saw lots of birds including an Anhinga that had speared a fish, a Short-tailed Hawk (a Florida specialty), Swallow-tailed Kites, and an odd Great Crested Flycatcher.  Although filled with birds, we did see other animals including a giant Eastern Diamondback Rattlesnake, large Florida Gars, and West Indian Manatees.  Later, we saw lots of Swallow-tailed Kites hunting dragonflies over a cane field as well.  Although we looked, we did not see Snail Kites. 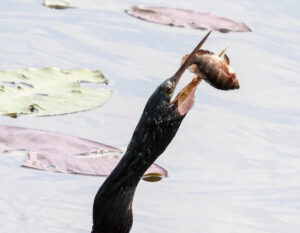 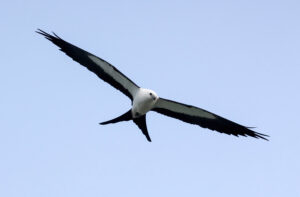 After leaving the Everglades NP, we drove to Miami to drop Gail off at a friend’s house so she could fly home early.  Since it was evening rush hour, we learned a lesson about driving in Miami at that time. We drove on to Boynton Beach, so we could show Clarke the wetlands at Wakodahatchee and Green Cay the next day.

The next morning after visiting Wakodahatchee and Green Cay, we then drove over to Clewiston south of Lake Okeechobee to meet up with Steve. Steve told us that there were farm fields with Barn Owl nest boxes along the way to Clewiston that we should check out; we did see a couple of Barn Owls.  We picked up Steve and drove around the western and northern edges of Lake Okeechobee to look for Snail Kites and Crested Caracaras.  We found the caracara but did not see a Snail Kite.  We had not seen a Snail Kite, an iconic bird found only in Florida in the U.S., the whole trip.  After our tour of Lake Okeechobee, we drove to look for Florida Scrub Jays, but the reserve was closed so we moved on to Lakeland, FL. 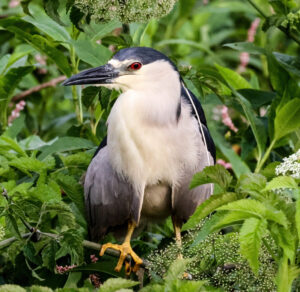 We got up the next day to go to Circle B Bar Reserve where Vern had had good luck on a previous trip.  It was very birdy there and we got lots of photos!  We saw lots of waders including Black-crowned and Yellow-crowned Night-Herons, Great Blue Herons, Little Blue Herons, and many others.  We saw an Osprey with a large fish. Afterwards, we went up to the Lake Apopka Wildlife Drive to show Clarke and to go on the actual drive.  It was hot and crowded on a weekend day, so we didn’t see much.  We recommend getting there early and not on a weekend. We had decided to spend the night in Gainesville to be close to several areas where we could see Florida Scrub Jays the next day.  On our drive from Lake Apopka to Gainesville, we went to Payne’s Prairie State Park.  Steve told us he had seen Snail Kites there on previous trips.  As mentioned earlier, we had missed the Snail Kites in areas where they used to be common.  We finally saw several very well.  When I had birded in Florida in the 1980s, Snail Kites were not that far north in Florida.  However, an invasive species of Apple Snail (a food source for Snail Kites) from Asia had been introduced and were moving north.  In addition, a hurricane had dumped a lot of water on Payne’s Prairie (formerly a dry prairie).  This created a large swamp with food for the kites, so they had extended their range.  What a great way to end the day! 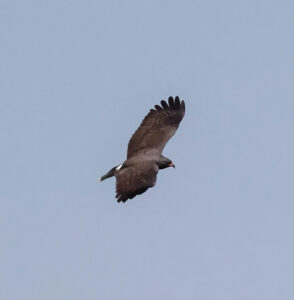 Afterwards, Steve left us to go home; a long drive from where we were in northern Florida.  Clarke, Vern, and I started back towards North Carolina.  Vern suggested we go through Waycross, GA to visit the Okefenokee NWR.  None of us had been there. We did see a small flock of Cape May Warblers, but not much else (it was the afternoon on a warm day). We spent the night in Savannah, GA.  The next morning, we took Clarke to Harris Neck NWR where we saw lots of birds and got very good looks at Painted Buntings and many other birds.  We spent some of the morning there and then proceeded home.

It was a great trip!  We saw lots of birds (148 species in Florida and 90 species in Georgia) and other unusual animals, butterflies, plants, etc.  We laughed a lot, ate some good food, and drank some good beer.  It was great to be travelling again with some good people!  If you want to see more photos from our trip, go to my Flickr page here