I pulled up to the gate early, at least an hour before the ranger would arrive at 8:00 to open it, and skirted around to enter the small parking lot with its pair of tall, ancient oaks defining the middle divide, always dotted with birds I wanted to see. Something exciting invariably greeted me, and often times, more birds than I could absorb at once. Those were the special occasions, when I’d have to exclaim, “Oh boy, oh boy, we’re gonna see a bunch of birds now!”

The Barataria Preserve of the Jean Lafayette National Park, about 20 miles south of New Orleans, was one of my very favorite places to watch birds and other animals in Louisiana. The Bayou Coquille Trail was paved, very civilized, yet meandered beside a most ancient-looking bayou alive with wildlife and dotted with oaks, cypress, palmettos, dripping with Spanish moss. 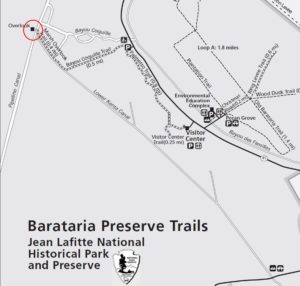 That spring morning in April, I quickly saw in the oaks and surrounding trees several warblers, a blue-winged(!) and a hooded, along with titmouse, cardinals, downy and red-bellied woodpeckers. Plus an ovenbird beneath the far trees. That parking lot rarely disappointed me. I made my way down the trail, and right away spotted a barred owl – with a fledgling chick! – sitting calmly, watching me. (Wonder if they too keep a list!) Farther along, I found a prothonotary warbler hopping on the cypress roots, with an impressively large moth, methodically beating it to submission against the tree. First time I’d watched a prothonotary in action.

The trail dead ends at the Upper Kenta Canal, where a wonderful, slightly zigzagging, narrow boardwalk leads down the Kenta Canal. The tee of the trails also transitions to a more open marsh area, with much greater sight distances, especially directly across the Canal and traversing half a mile or more of wetlands and marsh. In the sparse trees of this area, some years before, I had seen my first yellow-throated warbler. For some reason, it looked so large against the small leaves of the oak that I kept thinking it must be an oriole, and I had to do some extensive page-turning before discovering what it was!

It was mid-morning by now, and I stood on a bench scanning for anything I could find. That was when I noticed first several tree swallows flying back and forth above me, and then several more, and then more. And pretty soon, the sky almost to the horizon was full of swallows. They were flitting back and forth, making a mix of their chirps, chatters, and twitter calls. I was astonished at the numbers. I’d seen good sized groups of swallows working some creeks out west, but never anything like this. I started counting – 1 2 3 4 5 6 7 8 9 10, 20 30 40 50 – as I’d been taught, progressively overlaying larger segments of the flock, 100 200 300 400 500, 1,000 2,000 3,000! Until finally, the pattern dissolved and I could not comfortably extrapolate further. Damn, 3000 tree swallows; and maybe half again, or even twice as many more.

The back-and-forth pattern dissolved into a swirling mass, a tighter and tighter circle that began to spiral down from 100 feet up into a narrower and narrower vortex reaching down to the ground. I watched mesmerized as they settled onto several large bushes, like bees on a hive, like flies on a garbage pile, like something I’d never seen. The limbs sagged almost to breaking with their weight. I couldn’t imagine what they were doing. Eating berries? Scouring for any insects? Being buddies!? They stayed like that maybe a minute. Then, all of a sudden, they literally exploded back into the air, adding to my childlike glee at witnessing so grand a feat of nature. I laughed aloud at the show they were giving me.

The mass returned to the sky, almost disappearing for many minutes. But then, it began all over. The swallows appearing and flying back-and-forth across the sky, again in huge numbers. And again I tried to count, getting to 3000 once more before the pattern shifted to the circular flight. And that circular flight getting tighter and tighter until the mass again spiraled down, landing on a different set of large bushes. I watched as carefully as I could through my binoculars, but still could not discern just what they were doing. I waited expectantly for them to explode into the sky, like waiting for a 4th of July fireworks finale. I wasn’t disappointed. They burst into the sky again, in seemingly choreographed movement.

I searched up and down the trail hoping to spot someone who could witness this spectacle with me. Alas, when you finally don’t want to be alone, there’s never anyone nearby! I watched as the swallows repeated the maneuver twice more, etching it into my mind. The old adage came to mind: The more time you spend out in the bush, the more likely you are to see rare events. And I was pretty sure I had just witnessed a rare one.

Tree swallows in migration will form dense groups, of many, many thousands, and in the evening fly back-and-forth along open the marshes and slowly drop out to roosting sites. But what I had seen, no one has been able to explain very well. Maybe they were practicing, maybe they were bonding. I cannot say. But I’ll never forget the joy and excitement of watching their maneuvers. 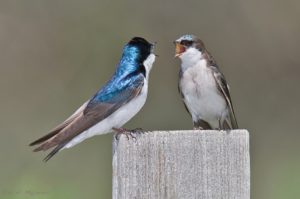 [A sad postscript: in late August 2005, Hurricane Katrina stormed up the Mississippi with devastating effect, knocking down half the trees in the Barataria Preserve, washing out much of the paved walk, crushing parts of the boardwalk. Recovery is slow, but it is coming back.]