It seems like a beautiful evening to sit on my deck and experience the waning day as it turns into night. The farming chores are done, so Dave and his crew have gone for the day. The tractor and tiller are put to bed in their stalls. All is quiet, except for a dog barking in the distance. With the trees in full leaf, even the occasional cars passing by on nearby roads are barely audible. As I sit still on my porch swing, the world settles down around me.

7:35 PM. I become aware of the katydids calling from the trees. They are a bit tentative as they are just gearing up for their nighttime chorus.

7:45 PM. A male Northern Cardinal flies into the 40-foot tall sugar maple I planted 30 years ago when I moved into my house. He’s coming to my sunflower seed feeder but is wary of my presence. He gives his high-pitched chip notes several times as he flits from limb to limb. He pauses, looks in my direction, then flies off—seedless for now. 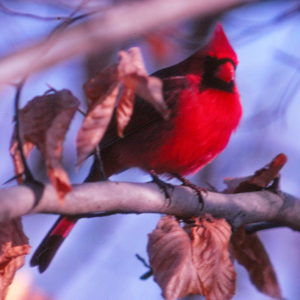 7:57 PM. Two Tufted Titmice come into the maple, making their ‘wheezy’ calls as they talk to each other. They take turns grabbing a seed from the feeder, and then fly back to the forest to prize out the kernels with their bills while holding the seed between their toes. 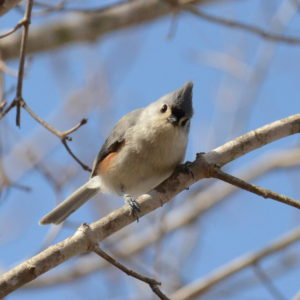 8:00 PM. All is quiet. Again, I become aware of the katydids, whose stridulations left my consciousness when the birds appeared. I realize that they were there all along, but my brain had filtered them out.

8:12 PM. I hear the clicking and chirping of a Ruby-throated Hummingbird, but I don’t see it. It’s somewhere in the tree above the awning. Then she drops down to a small branch and sits motionless. She’s green on her back, pale underneath, and has no dark gorget feathers, so I know she’s either a female or an immature bird of either sex. She flies closer to me—to the hummingbird feeder—but she’s tentative, not sure about this large mammal, sitting quietly in the swing. She hovers, for a moment, wings whirring. Then she’s gone. 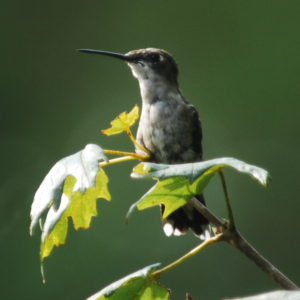 8:18 PM. “Who cooks for you? Who cooks for you all?” A Barred Owl calls in the distance. It sounds like it’s down by the creek behind my house. Perhaps it’s even further away, up the slope among the 100-year-old beech trees on the far side of the creek. The owl calls again; the sound penetrates through the now-constant katydids.

8:20 PM. The sun is low in the sky, behind the trees to the west. The air is still, not a hint of breeze. The heat is backing off. Wispy clouds drift gently overhead.

8:22 PM. Two cardinals, a female and a male, come into the tree, giving their chip notes as they assess the situation. That big mammal is still in the swing and hasn’t moved. The male cardinal comes closer to the feeder, flits in, grabs a seed, breaks it open, discards the shell, and then eats the kernel. He flies back to the tree near the female, then flies off to the hedgerow. She stays, sitting quietly, waiting. After a couple of minutes, I guess she decides it’s not worth the risk. Off she flies toward the hedgerow.

8:25 PM. The hummingbird returns. She sits on her branch for a moment, then comes to the feeder. Clicking and chirping, she flies and hovers above each of the holes in the feeder, quickly dipping her bill into the sugar water. It’s too dim for me to see her tongue, but I can just see the water move as she laps up the liquid. Silently, she’s gone.

8:26 PM. The katydids are now getting louder as the number of singing individuals increases. 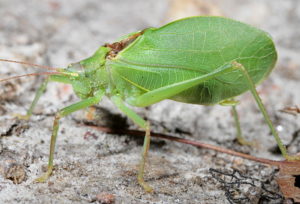 8:28 PM. Another hummer comes in, this time directly to the feeder. She looks a bit larger than the first bird, and she perches directly over one of the holes, sitting quietly while she drinks from the well. Based on her size and behavior I assume she is a different individual. She drinks for a full 30 seconds before flying off.

8:31 PM. The katydids are in full chorus. Their individual rasping, churring sounds are now indistinguishable. There are so many calling (hundreds? thousands?) that the din is constant. But no, it’s not really constant. I notice that the din ebbs and swells. One moment I can almost hear individuals, but then more and more join in until the chorus crescendos, then slowly wanes. It’s almost a tidal flow, ebbing and swelling at roughly 5-minute intervals. 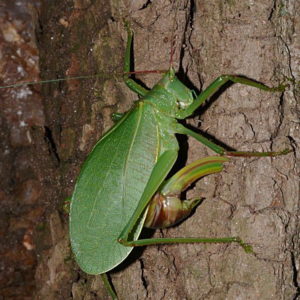 8:35 PM. Two hummers now, in a dog fight, as one chases the other when they approach the feeder. The katydids are at their loudest. The owl calls once. A dog barks in the distance.

8:37 PM. And now it’s quiet—but not totally so. The katydid chorus has ebbed. The sun is down now, the western sky aglow. This should be mosquito time, but it’s been dry.

8:40 PM. A firefly flashes. Then another. They dip down as they light up, so that their light makes a J-shaped pattern. This must be a different species from the ones I saw last month. Their pattern was a stuttering series of flashes in a straight line as they flew over the yard.

8:45 PM. The western sky is going dark. I can still see a few wispy clouds. Four or five fireflies now. The katydids have swelled and ebbed again. A single cardinal chips, but I can’t see him. The owl calls one more time, in the distance.