Evening Grosbeaks in a Winter of North Carolina Finches

It was during my teenage years when I first met Evening Grosbeaks. I had been birding for 4 or 5 years, and I had finally convinced my parents that we should put up a bird feeder in the front yard near our old gray birch tree. This was an exciting time because cardinals and titmice, two species from the southeastern United States, had begun to show up in western Massachusetts, and they immediately found our feeder. The titmice were more unusual at the time, but my father was smitten with the cardinals. My parents didn’t mind that I was interested in birds, but those cardinals cemented the deal. 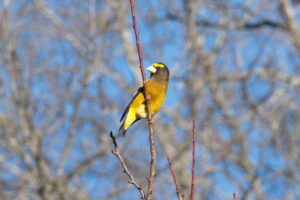 And then it happened. It was the morning after the first real snowfall, the kind that covered every exposed surface. I had gone to bed under leaden gray skies that had begun to drop their white flakes. By the time I woke up the next morning, the clouds were gone, revealing a bright blue sky, and everything was covered with snow—every bush, every tree limb, the yard, the driveway, and the dead-end road we lived on. The world was in a hush.

When I looked out the window, the activity at the bird feeder was just beginning. Black-capped Chickadees, always the first to arrive, were soon joined by their Tufted Titmouse flock mates. White-breasted and Red-breasted Nuthatches soon followed. White-throated and American Tree Sparrows then began poking in the powdery snow, trying to find the sunflower seeds dropped by the other species. A couple of Northern Cardinals came in and flashed their bright plumage in the morning sun. I parked myself by the bathroom window, the best viewpoint in the house, to watch the show.

Suddenly, the white hush exploded in a cacophony of bell ringing and a flurry of yellow, black, and white birds. Not one, not three, more like twenty or thirty. They came into the birch tree and then attacked the bird feeder. I was stunned. 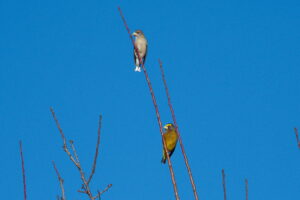 I ran and got my Peterson’s Field Guide to put a name to these birds. There they were, toward the back of the book—Evening Grosbeaks. Several of the birds would sit on the feeder and gorge themselves until they had filled their crops and then fly off. As soon as there was an opening, more of them would come in, gorge themselves, and fly off. And then more and more. Impatient birds would fly to the feeder and flutter around, trying to dislodge one of the gorgers. Others hung out in the birch, waiting their turn, or dropped down under the feeder to glean any fallen seeds they could find. It was a spectacle, and then suddenly it was over. The whole flock, 20 or 30 birds, took off and were gone. 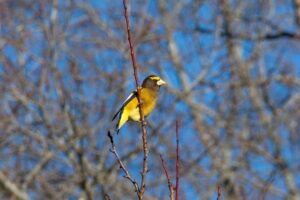 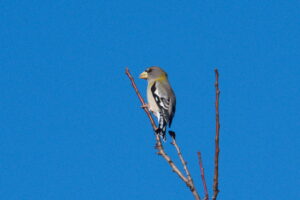 We are having an influx of grosbeaks in North Carolina this winter for the first time in about 20 years. Click on this link to watch a 3-minute video, narrated by our own Tom Driscoll, starring a flock of grosbeaks. (Video by David Anderson, Tom Driscoll, Joe Donahue, and Ben Graham.)

The scientific name for these birds used to be Hesperiphona vespetina. The genus name, according to Wikipedia, comes from the Greek words hesperos, “evening”, and phone “cry” and vespertina is Latin for “evening.” It used to be thought, incorrectly, that this species only called in the evening. Taxonomists have wielded their powers and recently changed Hesperiphona to Coccothraustes, meaning “kernel-cracker,” reflecting their view that these seed-eating grosbeaks are most closely related to the Hawfinches of the Old World, rather than our Rose-breasted Grosbeaks or Blue Grosbeaks.

According to some ornithologists (Gillihan and Byers, 2020), the unmistakable bell-like calls of the Evening Grosbeak are used mostly for intra-flock communication. “Evening Grosbeaks do not make much use of the longer, more complex, learned vocalizations (i.e., songs) that characterize the vocal behavior of most songbirds. The Evening Grosbeak seems to be a songbird that doesn’t regularly use songs.” Even at a distance, a flock of grosbeaks is easily identified by their ringing chatter as they fly by.

Evening Grosbeaks, like some other finches of the northern boreal forests—Red Crossbills, White-winged Crossbills, Common Redpolls, and Pine Siskins—breed in the spruce/fir forests of the northern US and Canada. During the breeding season, the grosbeaks specialize on eating spruce budworms and other insects. In the winter months, they switch to eating fruits and seeds, especially maple seeds. When there is an outbreak of budworms, the grosbeaks, like many bird species in times of plenty, are able to raise and fledge healthy broods of babies. The grosbeak population swells. This is all well and good if the winter seed crop is bountiful. But trees are devious. They produce bumper crops of seeds some years and cut back dramatically other years. So, if a budworm outbreak is followed by low seed production, the grosbeaks (and other finches) are caught in a bind—lots of birds, not much food. The result is what biologists call an irruption.

This year has been an irruption year in North Carolina and all over the eastern US. In the late 1970s through the 1990s, we used to see fairly large numbers of Evening Grosbeaks, as can be seen in this graph of grosbeak numbers reported on the Jordan Lake Christmas Bird Count. 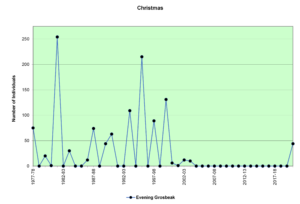 If you look carefully, you can see that prior to the year 2000, grosbeak numbers in our area generally were high one year and small the next year or two. This was a typical pattern throughout the eastern US in those years. After 2000, we rarely saw any grosbeaks in winter until this year. It is not clear why their numbers dropped so dramatically. This year (2021) has been a major irruption year for grosbeaks and other boreal finches. As a result, we have been favored by their presence yet again. Will this be a portent of winters to come? Only time will tell.

When grosbeaks showed up in Massachusetts when I was a kid, I was thrilled. My parents, not so much. They were forking over money for bird seed at a prodigious rate. Although they may be gorgeous, both the brightly plumaged males and the more subtly plumaged females are also gorgers. When a flock descends on a feeder, they can empty it in a matter of just a few minutes. But they do keep the bird seed farmers happy.