It was December 30, 1988, when I decided to look more in-depth at a budding desire I was developing
for birds. I had purchased a birding diary, which gave me the opportunity to document the famous “Life List”. This led me into another world of birding that I have loved ever since. The life list created the opportunity for me to step outside of my current skillset, and learn about new species. It also eventually led me to travel to wonderful places in North America, and learn about new species that I had never seen before. Approaching 630 ABA species now, my passion for birds has grown to new heights, and although it is not a 24/7 hobby, I try to get out as much as possible. While I don’t fanatically chase life birds, I do take the time to pick up one when I can, as I did in central Texas this spring for the Golden-cheeked Warbler and the Black-capped Vireo.

A few years ago, good friends of mine (Dan Hudson, Steve Shultz, and Lewis Burke) started looking at the year list idea, whereby a birder documents as many species as they can in one year. I absolutely love this concept because it gives me another shot at seeing numerous species each and every year. Multiple looks at a species only enhances your birding knowledge. Depending on whether I travel outside of North Carolina or not, I typically see anywhere from 250-400 species in a year. This concept gets me out there enjoying even the most common species, and I have become a better birder because of the year list idea.

But when it comes right down to it, “backyard” birding is truly my passion. I started keeping monthly records of backyard birds in 1996 in Cary, NC where I had 1/3 of an acre in a residential neighborhood. In December, 1999, I moved to northern Wake County near Falls Lake. My now three acres have been selectively manicured to create a National Wildlife Habitat, and first and foremost bring in as many species as I can. I removed numerous pines, to give other, more bird friendly hardwoods a chance to thrive and become more visible during spring and fall migration. I planted numerous bushes and shrubs for nesting opportunities, and I added many flowering plants to attract hummingbirds and butterflies. I added feeding stations that include many varieties of food and the all-important watering stations. It is my strong belief that the more common species that visit your yard, the more transient species you will see during the spring and fall. I have had 126 species visit the yard, including flyovers, but most have been seen in the habitat that I have created. 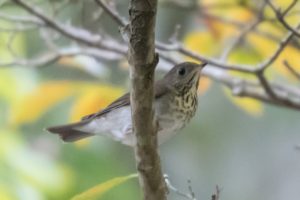 It was October, 2005, when the initial Gray-cheeked Thrush was identified, and after continuous yearly visits to the yard, I began to think about the idea of the Gray-cheeked Thrush Program. I wanted an easy birding experience for birders who wanted to learn more about the most elusive “brown” thrush in North Carolina. This northernmost nester of all the eastern thrushes is only seen during fall migration here in the central piedmont, and most birders don’t see it at all. Here on my property, the Gray-cheeked Thrush has been both reliable and cooperative due to the numerous mature eastern dogwoods and the red berries they produce in September and October. Along with the Wood Thrush, the Swainson’s Thrush, and the Hermit Thrush in the middle of October, it is possible to see all four thrush species in one day. Instead of trampling all over the Blue Ridge Parkway and hoping to see or hear a Gray-cheeked, a birder could spend a couple of hours with me, and get up close and personal with all the thrush species.

Finally, after years of studying the comings and goings of all the thrushes, including the identifications, their feeding habits, and most importantly, their arrivals and length of stay, I decided in 2013 to give everyone a chance to visit my property. The group size the first year was 30 birders, and right away I realized that I may have something unique. Birders participated in a relaxing birding experience, with little or no effort to see the thrushes, warblers, and many other species which happened to wander into the yard. I had a very enthusiastic group of birders who were anxious to learn more about the thrushes, some of whom needed the Gray-cheeked Thrush for a life bird. Each year the program grew, with many birders coming back each year, and the birds almost never let us down. 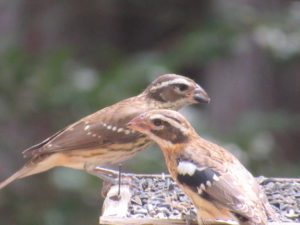 The 2016 Gray-cheeked Thrush program began on October 1st, and everything was in place to have another enjoyable and productive experience. Ninety birders had signed up for the eight days of the program, and my expectations were high. The Swainson’s Thrushes started to arrive in the first week of September, and the Wood Thrushes became frequent visitors to the berries during the middle of the month. A pair of Veerys showed up on the 5th, but they only hung around for a couple of days. Scarlet Tanagers, Red-eyed Vireos, and the first Rose-breasted Grosbeaks were tearing up the berries in late September. After a very warm late summer, the temperatures started to back off a little. Rain was plentiful in the spring and early summer; however drier conditions existed now. Warblers seen before the program included Chestnut-sided, Magnolia, Black-and-white, Northern Parula, Hooded, Yellow-throated, and Worm-eating. The monthly September yard count was approaching the record of 67, and things were certainly looking about normal. But when was the Gray-cheeked Thrush going to show up? 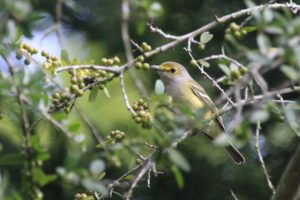 On September 20th, the first Gray-cheeked showed up to start the yearly gorging before heading south. When the program started on Saturday, October 1st I only had one Gray-cheeked. Fifty-seven birders flocked to the yard from the 1st through the 5th, many for the second, third, and fourth time. Almost everyone left with glorious looks at the Gray-cheeked Thrush, as well as the Swainson’s and Wood Thrushes. The lateness of the summer temperatures had the numbers of thrushes down, as well as the warblers; however, we were able to see some good stuff. 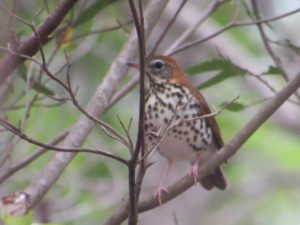 The program hosted 57 birders during the first five days, and the total species count ended up at 64. It was an absolute joy and privilege to have everyone participate in the program again this year. I think most everyone left with a little more knowledge, and an increased enthusiasm for the thrushes. Although the overall numbers of birds are down so far, as many birders know, it only takes one bird to make it a lifer. This program gives me the opportunity to work closely with good people, and share my knowledge and enthusiasm with the thrushes. It’s a great feeling to have a simple program like this one that attracts birders from all across the state of North Carolina. Warblers are my favorite bird species, but the thrushes are not far behind. And my current habitat allows me to regularly see a thrush that can be difficult to find, and bring the birding community closer to them. I’ve already been asked again to be sure that I have another Gray-cheeked Thrush program in 2017, and if the desire is still there, then who knows, it may just happen again.

[Editor’s note: A more extensive version of this article, with daily accounts, can be viewed in the Chapel Hill Bird Club Newsletter.]