I have published a couple of blog articles on this site (Gull Poop and Jordan Lake Gulls Revisited), discussing the presence and impact of the huge numbers of gulls that roost on Jordan Lake at night during the winter months and then spend their days at the South Wake County Landfill. This is the third in the series; hence “Revisited–Revisited.”

On January 5, 2020, New Hope Audubon held its annual Christmas Bird Count at Jordan Lake. Seventy-eight observers in 24 parties found 91 different species (just shy of our 10-year average of 92 species). Among those species were several unusual finds—a Merlin, several Blue-headed Vireos, a Blue-gray Gnatcatcher, a Gray Catbird, a couple of Black-and-white Warblers and a couple of Common Yellowthroats. But the stars of the show, as they have been every winter in the past decade, were the gulls. 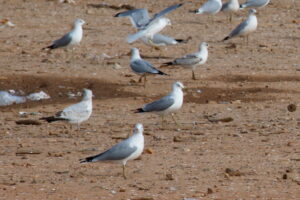 Sam Flake and Marc Ribaudo took on the unenviable task of counting the 14,500 (give or take) Ring-billed Gulls that roost overnight on the lake. In the morning, those gulls all head east to spend the day at the South Wake County Landfill in Apex. An observer can stand by the bridge that crosses Beaver Creek (near the Ebenezer Boat Ramp) and count the birds as they fly leisurely overhead. Scattered in the huge flock were some Herring Gulls. The immature Herrings are easily distinguished by their much larger size and darker plumage; the adults are a bit harder because size alone is often the only characteristic to go by. They also found a couple of Lesser Black-backed Gulls, and Brian Bockhahn saw a Great Black-backed Gull from Vista Point on the west side of the lake. Remarkably, Marc was able to pick out one Iceland Gull amongst all those thousands flying overhead. More on that bird below.

Earlier, in December, I met Sara Davarbakhsh (easy to pronounce if you leave out the ‘kh’ in the third syllable), the Environmental Program Coordinator for Wake County at the South Wake Landfill. She graciously (can you use that word when discussing a landfill?) offered us a private tour of the facility so that we could count the gulls. I’ve been wanting to do that for several years, so I jumped at the opportunity.

On January 24th Brian, Sam, Marc and I met Sara at the landfill office, hopped in her van, and drove out to look at the gulls. Yes, the landfill has a distinctive odor, but human noses habituate quickly, and we soon stopped noticing it. What we could not stop noticing was the huge number of Ring-billed Gulls swirling around above the giant earth-moving equipment that was pushing the trash into appropriate places to ultimately be covered over. This landfill is the depository for all the trash generated by the residents of Wake County. 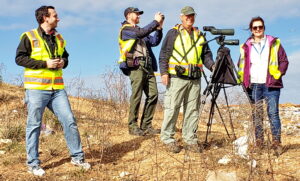 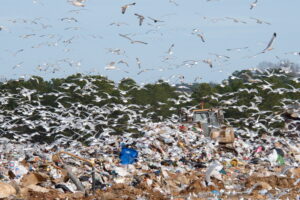 One thing we noticed was that the gulls became very active when the earth-movers were in the process of stirring up the garbage and uncovering any delicious morsels. When the vehicles stopped, the gulls would soon settle down—some picking through the garbage, others simply standing on the ground and waiting. There were also several Bald Eagles in the area, and whenever one of them passed by, all the gulls flew up into the air. If the eagle dropped down and stood on the ground, so did the gulls, leaving a respectful distance between themselves and their potential predator. 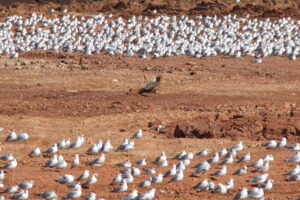 The eagle has landed.

There were other bird species at the landfill trying to get their share of the bounty. We noticed that they tended to stay segregated as can be seen in this photograph of pigeons (in front), starlings (middle ground), and gulls (in the back). 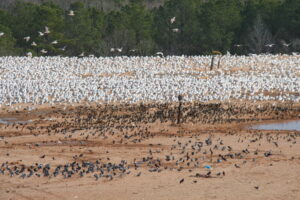 Pigeons, starlings, and gulls (front to back)

Counting the birds in the air was very difficult because they were moving, and they blended in with the immense pile of trash. However, when they settled down, the job was easier if they would just stay still long enough. Brian worked hard to get counts and came up with several estimates. Meanwhile, I worked at trying to get photographs of the whole group, starting at one side of the landfill and taking multiple non-overlapping photographs across the whole space. Later, at home, I superimposed a grid over those photos to make the counting easier. The nice thing about the birds in the photos is that even the flying birds hold still. 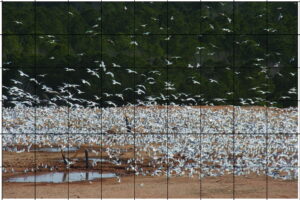 Meanwhile, Sam, Marc, and Brian were busy scanning through the masses, looking for the oddballs, the gulls that were not Ring-billeds. Amongst all those thousands, they picked out 44 Herring Gulls and 23 Lesser Black-backed Gulls. 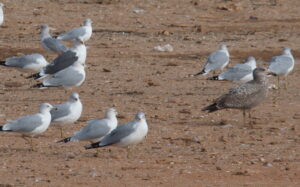 And then Marc spied a very pale gull sitting on a dirt pile on the far side of the landfill. At first, we all thought it was a Glaucous Gull, an Arctic species that occasionally shows up in the winter in North Carolina. Glaucous Gulls are the second largest gulls in the world, and this bird was clearly much larger than the Ring-billeds that were standing nearby. However, we took photographs and later, after much discussion, decided it was an Iceland Gull, perhaps the same bird Marc and Sam had seen at the lake on the Christmas Count. It was large, but it did not have the huge, sharply dark and light bill of a young Glaucous. Instead, its bill was relatively thin, and darkish at the tip, blending into a pale base. Its wings were also relatively long, an Iceland trait. Compare these 2 photos. 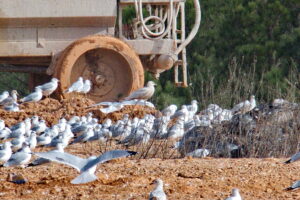 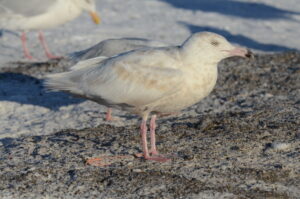 Now for the count. Brian made several estimates and came up with 12,000 to 15,000 gulls. Those included birds on the ground and in the air. Using my photographs with a superimposed grid, sitting leisurely at my computer with no ambient noises or odors, I estimated 11,000. At this scale, those are essentially the same numbers, so we feel pretty good about our results. Also, this jibes very nicely with the 14,500 that Marc and Sam estimated during the Christmas Count. It seems fair to say that most of the gulls that roost on the lake at night fly east and spend the day at the landfill. They then fly back to their roost on the lake where they surely ‘deposit’ some of the nutrients they have collected during the day.

In 2017, Scott Winton and Mark River, then at Duke University, published a scientific article on the implications of massive gull flocks at landfills (reference below). At that time, the 5-year average number of gulls per winter at Jordan Lake was 49,000, much higher than it has been in the past couple of years (about 12,000). Without going into details of gull fecal analysis (I’ll leave that to your imagination), I’ll just say that based on that number of gulls, Winton and River estimated that there was significant transfer of nutrients from the landfill to the lake. For example, they estimated that about a ton of phosphorus may have been deposited into the lake over the course of a single winter. This would be roughly equivalent to the amount of phosphorus exported by runoff from approximately 2,000 acres of corn or 11,000 acres of pasture. In other words, at that rate, the gulls should be considered as contributing significantly to the eutrophication (excessive nutrient content) of the lake.

The management and staff at the landfill are very conscientious about the potential impact of nutrient escape from the landfill into our atmosphere and waterways, and they take multiple precautions to minimize that impact. For example, the whole landfill itself is lined to prevent leaching of nutrients. And one of the byproducts of the decaying of all that waste is methane, a known contributor to greenhouse gases that can affect climate change. But at the landfill, that methane is captured in landfill gas collection wells and then used as fuel to run Diesel engines (themselves recycled from old tractor trailers) to make electricity to power approximately 15,000 homes! The gulls, however, have side-stepped the landfill personnel to carry their tiny packets of nutrients to the lake. 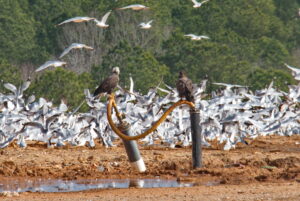 So, the gull saga continues. But why have their numbers decreased in the past few years? The sanitation practices at the landfill have not changed. The good people of the communities in Wake County are still producing lots of trash. Perhaps some of those gulls are ‘short-hopping.’ That is, perhaps during these milder winters we are experiencing, they have not been migrating as far south and have found other sources of delectable tidbits in other landfills. Or perhaps their numbers have not yet peaked locally. The good news for us is that the nutrient transfer to Jordan Lake seems to have lessened. But is it now being deposited elsewhere? Fertile minds want to know.