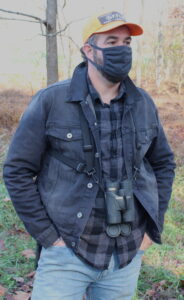 Meet Nick Harper, current manager of Braeburn Farm in Snow Camp, NC. It’s not your typical cattle farm. During his four years as manager, Nick has collaborated with owners Charles and Cindy Sydner to create biodiverse, chemical-free pastures on which they are currently managing about 230 head of cattle in three groups on this 530-acre farm. It is an astonishingly beautiful wonderland of biodiversity that amply demonstrates that farms and the native landscape work best as collaborators rather than enemies.

On November 14, Nick gave a tour of this property to some members of the New Hope Audubon board of directors and committee chairpersons. We all learned a lot, spotted some nice birds, and learned of other avian visitors that Nick has observed while tending the farm.

Nick lives his ecological approach to farming every day, as evidenced by the back of his jacket. 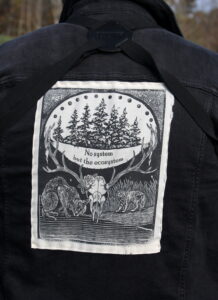 The results of Nick’s science-based, ecology-focused approach to farming speak for themselves. Instead of packing cattle into a tight feedlot that quickly turns to mud beneath their hooves, Nick rotates groups of cattle across pasture lands every two days. He uses temporary electric fencing to keep the animals where he wants them. As soon as they eat that portion of pasture, he moves the animals to a new spot. By rotating the cattle this way, exposure to diseases and pests that plague feedlot cattle is avoided. This removes the need for treatments like de-worming applications.

A Dung Beetle Genius – This healthy, balanced internal biodiversity in the cattle translates to vibrant biodiversity in the pasture. Case in point: dung beetles. Tom Driscoll describes Nick as “a dung beetle genius,” because of his knowledge of and attention to what Nick describes as “some of the hardest workers on the farm.” Because Nick doesn’t de-worm the cattle, their dung is not poisonous to the creatures evolved to handle cattle dung. Thus, these hard-working insects process deposited “cow pies” rapidly. In high summer, Nick told us, he routinely found ten different species of dung beetles busily at work, only one of which was a non-native species. Dung beetles, he told us, fall into three categories: dwellers, rollers, and tunnellers. Their presence ensures that cattle dung never accumulates anywhere.

On the cool November day of our visit, Nick found one species of dung beetle still hard at work. He also pointed out a native Golden Dung Fly (Scathophaga stercoriaria). It lays its eggs on fresh dung, where the eggs hatch and larvae develop, joining the dung beetles in eliminating dung before it can accumulate to unhealthy levels. 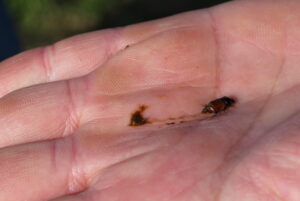 A dung beetle retrieved from a fresh cow pie.

On the cattle farm adjacent to the one Nick manages, the owner adheres to traditional management techniques. He sprays his fields with weed-killers and de-worms his non-rotated cattle. Nick told us there are no dung beetles utilizing the excrement from his neighbor’s cattle. 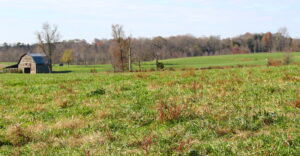 Nick actively encourages a wide array of plants in the pastures, including milkweed and other wildflowers. Nick says the cattle happily eat milkweed with the other pasture flowers and grasses and show no ill effects from doing so. During wildflower bloom periods, Nick denies access to the plants using his temporary fencing technique, thereby providing food for pollinators and other native wildlife, such as birds. In certain parts of the pasture, he allows the plants to grow tall to provide good habitat for ground-nesting birds. Managing for biodiversity has resulted in an array of bird species on the property; almost all the birds one would ideally expect to exploit such habitats are doing so. We observed and heard Eastern Meadowlarks throughout our visit. Other birds noted by the group included Ruby-crowned Kinglet, Red-tailed Hawk, Eastern Bluebird, Red-bellied Woodpecker, Sharp-shinned Hawk, and several sparrow species. Nick told us that he routinely sees Ravens on the site, and a colony of Barn Swallows that included 57 nests (according to the NC State University student studying them) occupied a barn this past summer. The ponds are routinely visited by many water birds, including a one-time visit by an Anhinga! The farm is also regularly patrolled by Bald Eagles, American Kestrels, Merlins, and Ospreys. This avian diversity is directly attributable to the farm’s biodiversity-focused management methods.

Leveraging Fodder Potential of Non-native Invasive Plants – I confess I am often frustrated by the disruption to native ecosystems caused by invasive non-native species. That’s why I was so impressed when Nick demonstrated how he has turned a potential problem – invasive tree species – into assets. The pastures contain small groups of two non-native interlopers common in the Piedmont region: Tree of Heaven (Ailanthus altissima) and Princess Tree (Paulownia tomentosa). Nick believes that because humans are responsible for the presence of these invaders, and because these trees are only doing what they evolved to do – grow rapidly and disperse seeds – it is better to find a way to incorporate these trees into the farm without allowing them to spread. He turned them into cattle fodder by pollarding the trees and feeding the trimmings to the cattle. 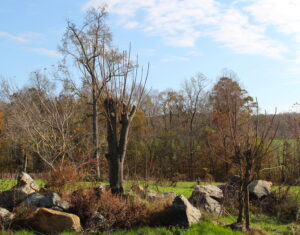 These Trees of Heaven were pollarded for fodder three times during the growing season.

During what he called the “summer slump,” pasture grasses become less productive. Rather than supplement with hay, Nick pollards the invasive trees for cattle fodder. He considers the tree fodder to be a critical benefit, because the nutrient value of the tree leaves is far higher than that of fescue in August. He assessed this scientifically by comparing Brix readings, which evaluate dissolved sugar content, for the tree leaves and fescue. The Brix reading for fescue was 3%; for the tree leaves, the Brix reading was 15%. Thus, the pollarded invasive tree leaves provide a significant nutrient boost to the cattle at a time when pasture plants drop in nutrient value. Pollarding encourages trees to push out fresh new growth that is higher in nutrients. And because Trees of Heaven and Princess Trees grow very rapidly, Nick was able to pollard the trees three times this past summer. Aggressive pollarding prevents the trees from flowering and producing seeds (the key to their invasive potential), maintaining them in a perpetual state of rapid vegetative growth during the growing season. Nick also pollards native Sweet Gums when they pop up. The local deer population grazes on all the pollarded trees too.

Trained in urban forestry, Nick’s choice to pollard trees rather than kill them is also influenced by studies of fungal (mycorrhizae) networks that connect trees, which have now demonstrated the complex communications between plants via these underground connections. He specifically cited the work of Suzanne Simard, a professor of forest ecology at the University of British Columbia’s Department of Forest and Conservation Sciences. Her TED talk on July 2016 is a great introduction to this subject.

Nick’s approach, which integrates farm operations with the native landscape, reflects his approach to working with our environment:

“If we can get rid of our egos, we will move forward amazingly quickly. There’s so much we need to learn…We’re animals too, and we’ve been part of ecosystems as long as we’ve been here.”

Nick actively collaborates with a number of innovators in this field. He works with Eliza Greenman and her Hogtree Orchard project, which manages hogs in orchards to the benefit of both trees and animals. He cited the work of Chris Newman, a well-known advocate for biodiverse farming in Virginia. He collaborated with folks at the Handy Village Institute in Saxapahaw, NC to erect a wind turbine on the farm. The energy it generates reduces peak load on the local energy co-op. He is also collaborating with others to find ways to creatively support young small farmers, because he believes that currently “there’s no investment in future farmers. They can’t manage it financially.”

Personally, learning about the work of Nick and other young experts gives me hope for the future. Their expertise, enthusiasm, and collaborative approach to problem-solving bodes well for an ecologically diverse, healthier planet. I think my fellow tour members would agree. 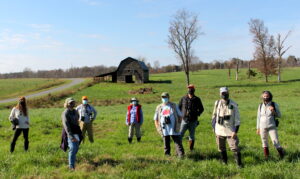 Missing in the group photo is the photographer who took all photos in this article – Tom Scheitlin.