Living with Cats and Birds

I come from a family of cat people. Cats were always part of my childhood household, and I continued to share my home with them as an adult. That was before I learned how significantly cats impact bird populations, and before I read studies that showed how bird populations are declining around the world.

Like many cat owners, my cats were indoor-outdoor cats, meaning I let them roam about on their own unsupervised. By ten years ago, when my last indoor-outdoor feline died at age 19, I knew better. My spouse and I decided we would never own cats again unless we managed to build a screened-in porch on our house, so that pet cats could sit out on it and watch birds and other wildlife without endangering themselves or their potential prey. By then, I had read an article in Nature Communications titled, “The impact of free-ranging domestic cats on wildlife of the United States.” The authors estimated that in the United States, cats kill about ten percent per year of the approximately 15 billion adult land birds also living in the US. By then, I understood that domestic cats are an invasive, non-native species that substantially disrupts native ecosystems.

In my own yard, I noticed changes in local wildlife numbers/distribution after we buried our last old kitty, Zeke. The sunny, west-facing entry to our house is landscaped with abundant flowers and shrubs. During our outdoor cat years, we occasionally spotted a skink or anole sunning itself on our front walks; we also saw a lot of lizard body parts, courtesy of feline hunting. In the garden, an abundance of praying mantises and spiders patrolled the flowers. I rarely saw lizards hunting there.

A few years after Zeke died, wildlife population distribution in my garden changed. Lizards were everywhere, lounging on sunny walks, perched on Joe Pye weed looking for lunch. At the same time, the number of praying mantises I observed dropped noticeably. I now find far fewer of their egg cases every autumn. I’m fairly certain that while the cats were alive, they ate so many lizards that the praying mantises were able to dominate the front gardens. With the cats gone, the lizards multiplied, and I’m guessing they eat many young mantises every growing season. I still see mantises, but the balance between their population and that of my local lizards has definitively changed.

Over the same time period, I also began encountering many more beneficial snakes – mostly very healthy black rat snakes, but also garter snakes, ring-necked snakes, worm snakes, and even king snakes. With no need to worry about cat predation, the snakes have multiplied to address the abundant rodent and rabbit population that shares our five acres with us.

These observations fell into place for me when I read an article that explained how cat predation on native wildlife alters not just populations of prey species, but also native predators, because cats are killing the prey that predators such as foxes, hawks, and owls need to survive. I suspect that the native prey-predator relationship in my yard now more closely approximates what it should be, despite the occasional domestic cat that I observe wandering uninvited on my property.

All these observations strengthened my resolution to never own a cat again unless I could keep it happy as an indoor-only resident. As much as I missed felines in my life, financial realities precluded a porch addition. No porch, no kitty.

Then the health of my friend, Leila, who successfully battled stage four cancer for over seven years, began its final decline. 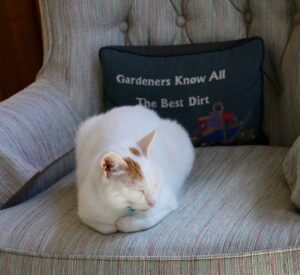 Leila’s beloved companion was her cat, Rose, an eight-and-a-half-year-old completely deaf Japanese bobtail. Leila lived on the top of a ridge far from roads, and like many cat owners, allowed Rose to come and go via cat doors whenever she liked. Leila knew that my spouse and I had loved and cared for cats into their old age. She asked us to take care of Rose after she died.

We initially declined, explaining that our yard was far too dangerous for a small (7.5 pounds) deaf cat like Rose, and we had promised ourselves we would never own cats again that were allowed to roam the outdoors. Leila explored other options, but returned to us with an offer to pay for the construction of a porch. Her desperation touched us, so we researched catios.

A quick online search on catios will bring up many videos and articles on how to construct them and how happy their cat residents can be. My spouse is a busy guy with no time to build a catio that Leila would have found suitable. He found a company in Canada, Habit Haven, that designs and builds custom catios. They ship it in pieces for assembly at the destination site. 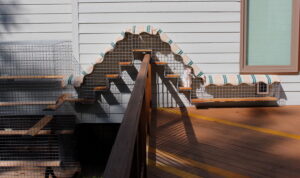 After Leila approved the design shortly before she died in late May, we ordered and assembled an elaborate catio for Rose next to our backyard deck. Rose accesses it via a cat door we cut into an outside wall. As seen in the photos, Rose uses enclosed steps over the deck rail to access her catio from the cat door in the wall. Two identical 8’x8’x4’ enclosures are linked via upper and lower walkways. The tarp over the top keeps her dry, and an outdoor house with a warm bed provides a private lounging spot. A pot of catnip sits beside a grow-bag bed that will be full of flowers during the growing season. 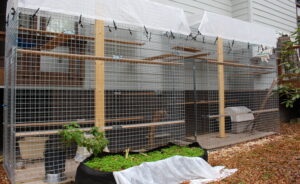 She adapted to it quickly and goes in and out as she pleases. Several bird feeders we keep supplied in the back yard are visible from Rose’s catio, and she spends much time watching cardinals, sparrows, finches, chickadees, titmice, woodpeckers, nuthatches, and warblers dining on seed and suet. Squirrels gather what the birds drop and cottontail rabbits and deer occasionally nibble grass in the backyard, so Rose has much to keep her amused, albeit a bit frustrated. Local native wildlife quickly learned they are safe outside the catio as seen in the photo showing an anole on top of her catio while she naps. 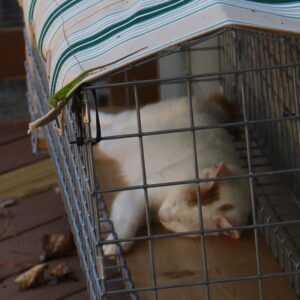 Anole lizard on top of catio.

Rose was still not entirely happy, often trying to exit opening doors, so we leash-trained her. Now, weather permitting, Rose walks daily around our five acres on her leash. Fortunately for us, Rose is an intelligent animal. When we made it clear to her that the only way she would see the rest of the yard was at the end of her leash, she agreed to our terms. Now, when we pick up the leash, Rose knows what it means and waits for us to fit the harness around her small body. As seen in the photo, the harness fits snugly but not uncomfortably around her torso. She appears to have learned the layout of our five acres. We never know from day to day which route Rose will choose as we climb up and down hills, investigate the adjacent creek, or climb wood piles. 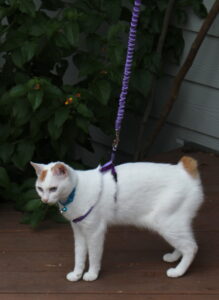 My spouse and I have spent the past 30-plus years enhancing the local microenvironments in our yard with suitable native plants. Native wildlife displaced by ever-increasing suburbs popping up where woodlands once grew have responded with enthusiasm. Just about every native animal you might expect to see either lives on or visits our yard. In addition to our visual sightings, we have confirmed this by placing wildlife cameras beside the creek that borders our land. In the last year, those cameras have captured a river otter (no doubt a resident of an adjacent beaver pond), numerous deer, raccoons, possums, wild turkeys, great blue herons, groundhogs, coyotes, bobcats, and just recently, a fox and a domestic cat. In addition to mammalian predators, we also routinely observe red-shouldered and sharp-shinned hawks and barred owls. With so much competition for food, it is easy to imagine how losing ten percent of bird species annually to domestic cat predation disrupts native ecosystems. 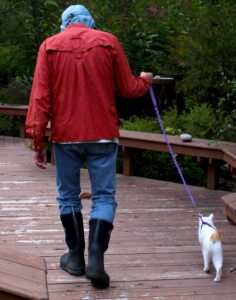 We like to think that Leila would be pleased with Rose’s new life. Her catio and leash walks keep her well-exercised, abundant wildlife keeps her entertained, and she is always safe. And as far as cat predation goes – barring occasional interlopers – native animals in our yard have one less non-native predator to worry about.

Editor’s comment: A recent report in the journal Science estimates an astounding loss of 29% of birds in North America compared to their abundance in 1970. Outdoor cats are cited as one of a number of contributing factors.