How Do They Do It? The Magnificent Wandering Albatrosses 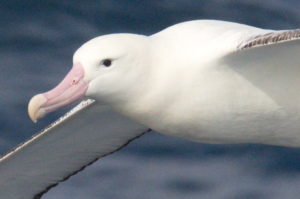 I have watched Wandering Albatrosses follow a ship I was on for hours without ever beating their wings. They simply fly in wide arcs, swooping downwind toward the water, then catching the updrafts off the waves and gliding upward (called dynamic soaring). They can lock their wings in this gliding posture, so they don’t have to spend energy holding their wings out. (Try holding your arms out for just 10 minutes!) In moderate to heavy winds, albatrosses can do this for hours at a time with negligible energy costs. If there is no wind, however, they become becalmed. Hauling all that weight around becomes very expensive. But Wandering Albatrosses live in a windy part of the world, the southern oceans, so this is rarely a problem for them.

Wandering Albatrosses do have to land on the water to feed. They spot food from the air—squid, fish, crustaceans and even dead whales and seals floating at or near the surface. They rarely dive into the water, but rather settle onto the surface and pluck up their prey. To get off the water, they turn into the wind, flap their wings a couple of times, and get back into gliding mode. 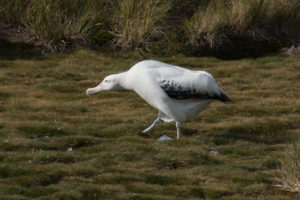 Albatrosses only come to land to breed on various islands in the southern oceans. As graceful as they are in the air, they are equally as ungraceful on terra firma. As they come in, they put down their landing gear (legs and feet) and try not to tumble over as they hit the earth. It helps that they typically nest in grassy areas, so they don’t get hurt if they do tumble. And those grassy areas are near cliffs, so that to get airborne, they simply walk to the cliff’s edge and ‘jump’ off. 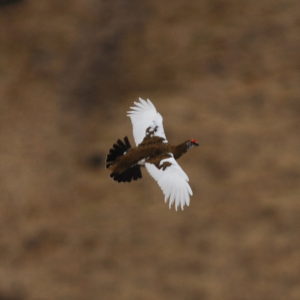 How do they do it? What are the adaptations they have gained through evolution that make it possible for them to live this amazing life in the air? First, consider the concept of wing-loading. Wing-loading is the relationship between body weight and wing surface area. The lift a bird can generate is directly related to the surface area of its wings—the more surface, the more lift. Heavy birds need to generate lots of lift in order to fly. Birds with high wing-loading, think chickens and turkeys (or the Rock Ptarmigan pictured here), tend to be very heavy and have short, stubby wings. If you have ever been startled by a Wild Turkey exploding out of the trees in front of you as you walk quietly along a forest path, you know what it’s like for a bird to have high wing-loading. Turkeys burst into the air making a huge noise, flapping their wings very rapidly, but they don’t (can’t) fly very far. That kind of flight is expensive, and their wing muscles get tired quickly. Turkeys rarely fly except when they are in escape mode. 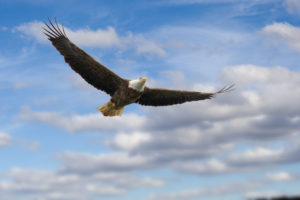 Where do our albatrosses fit into this scheme of things? They are quite heavy-bodied birds, so they have high wing-loading. But they also have high aspect ratio wings, in the extreme. This makes up for the high wing-loading, so they can soar for hours and still be maneuverable when they need to be. 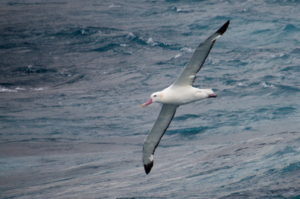 It is hard for humans to envision the weeks, months, even years that Wandering Albatrosses spend at sea. But think of it from the albatross’s point of view: What are those strange creatures who spend all their time stuck fast to the land? Occasionally they go up in one of those metal fixed-wing monsters with high wing-loading. It must be rather difficult to find a squid from one of those things, let alone drop down and pluck it from the water’s surface for a tasty meal.

I bet the albatrosses prefer being albatrosses. Even if it means they have to drink seawater when they are thirsty. But that’s another story.

Some of the information in this article was plucked from these sources:
Dereck Onley and Paul Scofield, Albatrosses, Petrels, and Shearwaters of the World.
David Allen Sibley, The Sibley Guide to Bird Life & Behavior.
Wikipedia article on Wandering Albatross.

Photographs by Norm Budnitz except the Bald Eagle by Bill Majoros.