It’s winter in North Carolina, and you hear chickadees ‘dee-deeing’ as they work the branches in the leafless trees above your head. As you look more carefully, you realize that there’s more going on than you thought from your first impression. For one thing, along with the 4 or 5 Carolina Chickadees (the species in our area) there are also half a dozen Tufted Titmice in the group, making their raspy calls. Both of these species flock together in winter, moving through the forest, gleaning whatever they can find on the branches, twigs, and old dead leaves still hanging in the trees. If you watch carefully, you’ll see that they don’t seem to be focusing on any one part of a tree. They keep moving, searching under a leaf here, probing in a tangle of vines there, picking in a bark crevice for some hidden insect larva. These species also come to your sunflower seed feeders, of course, but at the moment you’re out in the woods in a more natural setting. Are they finding seeds here as well? Probably. These birds are generalists, and they will eat most anything—insects, seeds, fruit—that they can manipulate with their bills. If it’s got protein, carbs, and especially fat, it’s fair game for these guys. 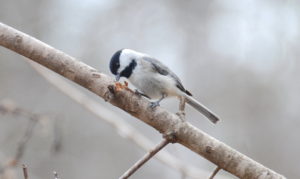 Carolina Chickadee working over a branch 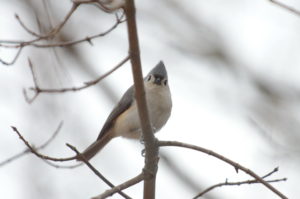 As you watch, you may notice that some other birds are in the mix. The chickadees and titmice may be the most obvious, but White-breasted Nuthatches will often be working the trunks of the trees, climbing both up and down, their heads and tails sticking up while their bellies are tight against the tree, seemingly unconcerned that the blood might rush to their heads when they run down the trunk, probing in the bark. Apparently, dizziness is not a malady nuthatches have to worry about. If you happen to be in a piece of forest with pine trees, you might also hear and then see Brown-headed Nuthatches as well. These little guys sound remarkably like squeeze toys or rubber duckies and are often heard squeaking in the treetops before being seen. They, like their white-breasted cousins, seem oblivious to gravity, hanging underneath limbs as well as climbing around on top. 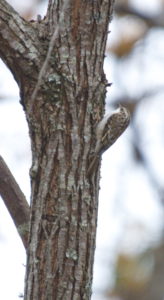 If you are quiet and watchful, you may see another bird working the tree trunks. This species, the Brown Creeper, is less conspicuous than the nuthatches. Brown and streaked, it is well-camouflaged against the tree bark. Unlike the nuthatches, it hugs the trees with its tail. Also unlike the nuthatches, it rarely faces or moves downward, preferring usually to climb upward, spiraling around the trunk. Up and up it goes. And when it runs out of tree at the top, it simply flies down to the base of the next tree and starts climbing up again. With its thin, down-curved bill, it may be able to reach deeper into the bark crevices than the nuthatches, thus finding a different set of insects.

Also associated with these flocks are kinglets, both Ruby-crowned and Golden-crowned. These tiny birds, perhaps four to the ounce, are only slightly larger than some hummingbirds. Like the chickadees and titmice, they will be flitting around amongst the branches and dead leaves, probing here and there for anything they can find. They also tend to fly out and hover momentarily, hawking flying insects they may have scared up or picking an insect off a leaf. These tiny green birds can be difficult to identify, but they both often flick their wings open and closed as they move about. This wing-flicking may be the movement that catches your eye in the first place. The ruby crown of the male Ruby-crowned Kinglet is often hidden by other feathers. But when aroused or agitated by another male or a nearby predator, this little guy can raise those feathers and flash them brilliantly. The Golden-crowns, both male and female, have yellow crown feathers, but the males also have bright orange crown feathers that, like the male Ruby-crowns, they usually keep hidden. 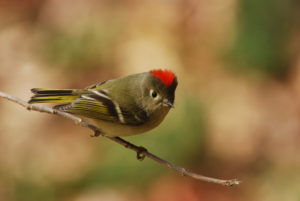 Other species also join these roving mixed flocks. Downy, Hairy, and Red-bellied Woodpeckers, Carolina Wrens, and Yellow-rumped and Pine Warblers sometimes hang out nearby. Less commonly in our area, but occasionally found are lingering migrant warblers such as Black-and whites or Orange-crowneds. If you use pishing to attract the flock, and if you are persistent and keep at it after the usual suspects seem to be losing interest, watch for Blue-headed Vireos. This species tends to hang back and come in late as the flock begins to move off.

Mixed flocks tend to be a winter phenomenon in our area. (Mixed flocks in the tropics are another story for another time.) These winter flocks break up during the breeding season, when mated pairs get down to the business of rearing their young. After the babies fledge, small family groups will often forage together for a while. But soon enough, the mixed flocks will coalesce again for our woods-wandering enjoyment.

Some of the information in this article was gleaned from the leaves of these books: