The Purple Martin is the largest North American swallow. About eight inches in length, these streamlined birds have a slightly forked tail, and the adult males have a distinct steely blue/violet coloration. Females and subadults are much more drab, with mostly dark gray plumage above, and white below. 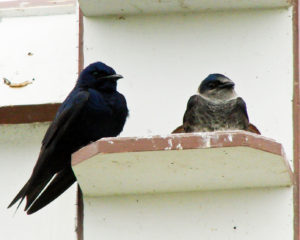 In North Carolina, Purple Martins are typically seen between early March, when the first “scouts” arrive, and early August, when the birds congregate in massive roosts. Purple Martins winter in South America, and migrate to North America in order to breed. Traditionally dependent on natural cavities for nesting, the Purple Martin experienced serious population declines in the 20th century, especially in the eastern half of the United States. Much of that decline has been linked to competition from European Starlings and House Sparrows, two invasive species that also utilize natural cavities. By the 1980’s, the Purple Martin had become scarce over much of its breeding range.

Native Americans had long cultivated a relationship with Purple Martins before the arrival of Europeans, and recognized that the birds readily utilized hollowed-out gourds. European settlers carried on this tradition, and it is indeed the hanging gourd that has been the salvation of this species on the east coast. Today, natural gourds have evolved into complex manmade structures, often employing several plastic gourds or multi-cavity “condominiums.” Since Purple Martins breed communally, human “landlords” will typically expand the number of artificial cavities once a colony gets established. The Purple Martin population has since rebounded.

Purple Martins are insectivores, taking most of their food on the wing. They tend to be seen near active nesting colonies, often near water. Because they tend to favor open areas, it’s common for farmers to establish colonies in farm fields. Rural enthusiasts have developed an entire subculture around Purple Martins, with online communities exchanging tips on how to attract and help propagate more of the birds.

After the Martins finish with breeding and raising their young, they begin congregating in large roosts, typically in mid-summer. Thousands of these birds will find their way to the party from miles away. One of these massive roosts can be observed in late July near Manteo. 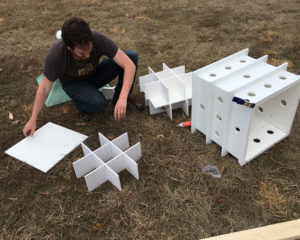 The challenge of assembling the new condo!

Established breeding colonies in the urban Triangle are uncommon. Witherspoon Rose in Durham hosted a good-sized nesting colony for many years, despite close proximity to two major highways. The owners had erected a deluxe, multi-cavity condo, and managed to keep starlings and sparrows at bay as the colony grew. The recent sale of the Witherspoon Rose property put those Purple Martins in peril, as there would no longer be a nesting structure on the site.

The New Hope Audubon conservation committee approached the developer of nearby Patterson Place to see if a replacement condo could be placed. An optimal site was found roughly 300 meters from the original Martin house, next to a retention pond. The developer agreed to fund much of the cost.

Materials for the project ran at about $1000. On an unseasonably warm February weekend, three volunteers (Tommy Richey, Ken Hackney, Mark K.), decided to erect the new house. The timing was critical, as the first Martin scouts had already begun to arrive in South Carolina. 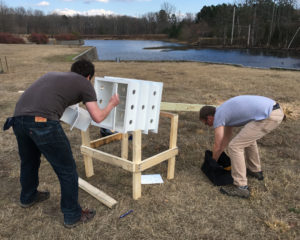 Final assembly and a view of retention pond

The volunteers rented an auger from nearby Home Depot, in order to drill a deep enough hole into the clay soil. The 16 foot 4×4 would required a steady base, so the hole was drilled almost four feet deep. This would prove the most difficult aspect of the project.

The house itself arrived slightly damaged, with one corner of the PVC material broken off, and several separations occurring at the seams. Since the volunteers did not have time to send the house back, some creative repairs using epoxy, caulking, and even string were used. As is typical with unassembled items, the instruction manual was useless, and many of the parts were missing or the wrong size. Some more trips to Home Depot, and lots of on-the-fly engineering got the job done. Eventually the house and pole were ready to be placed, and the concrete poured. 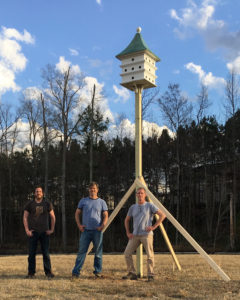 Completed condo and volunteers who made this possible!

The new Purple Martin house can be viewed from Danziger Drive in Durham, just south of Kohl’s in Patterson Place. There are no guarantees that the former Martin colony will find the new condo and utilize it. However, since the location is so optimal for this species, the hope is that the house will soon be colonized. Updates will be made available on the New Hope Audubon Facebook group page.