Noticing the Little Things in the Summer Garden

The hot and hazy days of Carolina summers are upon us. There’s not so much work to do in the garden now except maybe for some morning weeding before the heat of the day and watering during dry spells, which is certainly not a problem at the time of this writing after drenching rains from thunderstorms and tropical storm Elsa! So perhaps you can take some time to notice all the wildlife in your garden, especially those things present in a pollinator-friendly, insecticide-free (including no mosquito spraying!), native-plant garden. So consistent with the theme, let us show you some of the little things in Jim’s garden this summer that he’s not noticed or not paid enough attention to until now. We will highlight a few in this article.

As a side note, David has been using his iPhone to photograph insects that he finds everywhere he goes and has gotten some excellent photos. They are much better than Jim’s, which Jim likes to think is due to a better camera in David’s iPhone 11 rather than due to Jim’s shakier hands and inflexible body. So, all of the photos in this article have been taken by David and were found in Jim’s garden unless otherwise noted.

The first photo is presented as a puzzle to be solved. If you solve it right away, you are very perceptive. This is happening on the flower of a daisy fleabane, which is only ¾” inches across to give you a sense of scale. It took a second look by David of this photo before he noticed it. So, take a look at this mystery photo and try to figure out what is going on. The answer will come later in the text, so be patient. 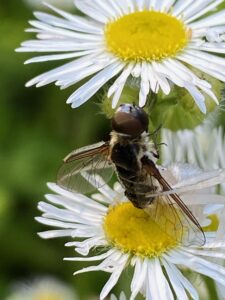 There are a large number of species of wasps in North Carolina, and most of them are not a threat to sting you unless you force the issue. Yellow-jacket wasps and hornets have given the others a bad reputation, but most are quietly going about their jobs, visiting flowers for nectar and some even acting as pollinators. Many are parasitoid, laying their eggs in the larvae of other insects. Pictured here is the noble scoliid wasp visiting mountain-mint to get nectar. It is a natural biocontrol agent laying its eggs in scarab beetle larva including the invasive Japanese beetles. 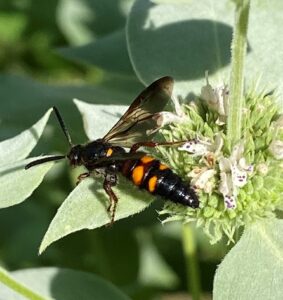 If you observe the  bumblebees in your yard, you will start to notice some differences for there are several species of bumblebees found in the Piedmont of North Carolina.  David and Jim have discovered three in Jim’s yard so far this summer, including the brown-belted, American, and common eastern. Only the female workers and the queen can sting, but they are docile and sting only in self-defense. They are too busy at work gathering pollen to bother you, and  thus are important pollinators in the garden. Pictured here is a brown-belted bumblebee taking a nap on a purple coneflower after a hard day’s work. True bumblebees are in the Bombus genus, but there are bumblebee look-alikes in different genera that David has photographed in Jim’s yard including the eastern carpenter bee and hibiscus bee, both of which are also good pollinators. 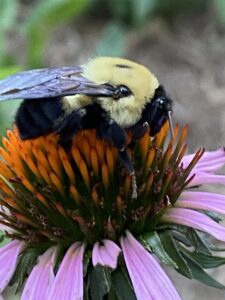 Also pay attention to the dragonflies in your garden, and you will start seeing very noticeable differences between them since there are many different species in North Carolina. Pictured here is the great blue skimmer. Dragonflies stay busy darting through the air and catching their prey on the fly using their legs. Their four wings make them able to hover or even fly straight up and down. Adults are important predators of adult mosquitoes, and their aquatic larvae are predators of mosquito larvae.  They evolved around 300 million years ago and were one of the first winged insects, so their design has stood the test of time! Early dragonflies had wingspans of up to two feet, so if they hadn’t scaled down, they would not qualify for this article on noticing the little things! 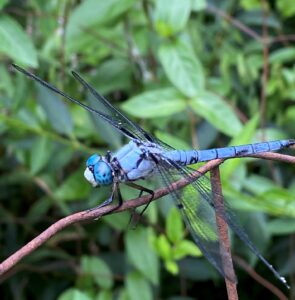 Dragonflies are not really flies, in spite of the name, so how about the real ones? We associate flies with the annoying house flies and biting horse flies, but have you noticed all the species of tiny hoverflies that are just busy going around from flower to flower and no bother to us? Pictured here is the tiny oblique streaktail (1/4” long) visiting daisy fleabane for nectar. It is an important pollinator as an adult and its larvae are predators of aphids. 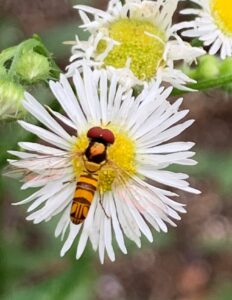 Of course, there are the little butterflies and moths, much smaller and less spectacular than the swallowtails, monarchs, and very large luna moths but still beautiful in their own way. Pictured here is the red banded hairstreak butterfly, which is about the size of a thumbnail. Its false head, eyes, and fake antennae on the back of the wing may cause predators to attack there first and allow it to escape with only some wing damage. It lays its eggs on the undersides of dead leaves on the ground, and the larvae feed on dead leaves and other detritus in the leaf litter, once again illustrating the importance of “leaving the leaves!” Check out two blog articles for more information about leaf litter, “Leave the Leaves” and “Littering with Leaves.” 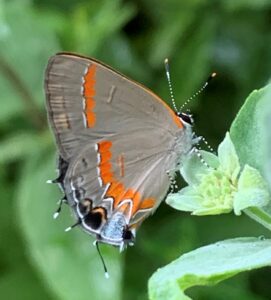 You may have noticed clearwing moths in your garden especially one called a clearwing hummingbird moth, which when you see it from a distance hovering over a flower, you might well mistake for a hummingbird. Clearwing moths have the distinction of being some of the few moths that fly during the daytime, and they are important pollinators as they go from flower-to-flower sipping nectar. Pictured here is the diminutive (less than ½”) ironweed clearwing on one of its host plants, which is, as you might guess, is an ironweed. It mimics a wasp to try to avoid predators. 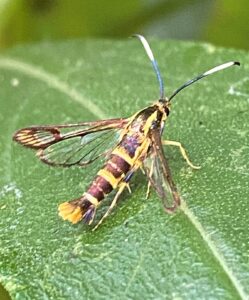 Leafhoppers are one of the smallest and easiest to miss insects in the garden. Shown here is the yellow-striped leafhopper, which is only about 1/8” long. Leafhoppers are insect herbivores that suck juices from plant tissue and in turn are eaten by larger insects and birds. Thus, they are a part of a healthy ecosystem and play their important role in the food chain. This species seems to have abandoned camouflage for more stylish striping for reasons unknown. 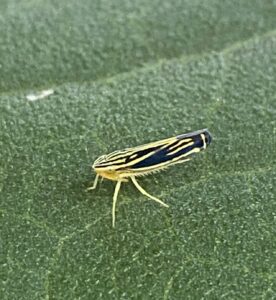 Finally, here is the answer if you didn’t figure it out yet. Look in the red circle on the photo. It shows a flower crab spider having captured a bee fly. You should be able to make out part of the head with an eye and the body on the right of the fly and some legs on both sides of the fly. The crab spider lazes away on a pretty flower waiting until an unwary insect pays a visit for nectar or pollen and then grabs it. The female flower crab spiders can change their color between yellow and white to better match the flower color although it may take up to 25 days to change to yellow and only 6 days to change back to white. This may help avoid predators and fool their prey. 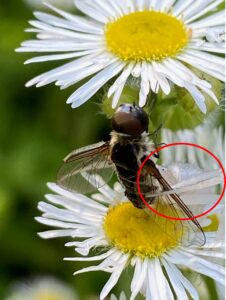 Amazing enough, David took another photo at a later time of the same thing happening at the NC Botanical Garden! Take a look at this next photo on a rattlesnake master bloom and see if you can find the crab spider immediately under the bloom and grabbing a fly by the back of its neck. 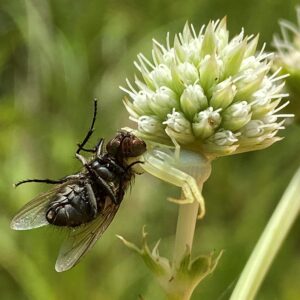 This is just the tip of the iceberg, so to speak, since David has photographed well over 400 species of insects, spiders, and their relatives in our area, including over 70 in Jim’s yard. So, if you decide to get out in the garden more in this summer, go out armed with nothing more than your camera or smart phone (and maybe some insect repellant) and see how many interesting “little things” that you can find. Prepare to be amazed at all that is happening, especially on the smallest level.

In addition to planting native plants to attract these amazing little things, please try to not use insecticides. An ecosystem in your yard that is full of native plants will achieve a balance so that any feeding of native insects on your plants is held in check. There are invasive insects that can do a lot of damage, but there are usually biological controls that work for them. Especially avoid the indiscriminate spraying for mosquitos. See the blog article, The Invasion of the Asian Tigers, for better ways to control mosquitos. Along with your other plantings this fall and if you don’t have any yet, consider planting some mountain-mint, either Pycnanthemum muticum or P. tenuifolium, since these species are magnets for a number of pollinators and other insects in the summer. Be aware that P. muticum is a vigorous spreader and will require periodic “editing.” Jim has both species and sees a variety of different insects on each. Also consider planting what Doug Tallamy is calling keystone species of plants (see the blog article, Help Build a Homegrown National Park, for more detail). They are named as keystone because of their vital role in hosting caterpillars, which provide essential, high-energy food for songbirds to raise their young. See our native plant listings for keystone plants in this area of the NC Piedmont.

It is a wholesome and necessary thing for us to turn again to the earth and in the contemplation of her beauties to know the sense of wonder and humility. – Rachel Carson

Look deep into nature, and then you will understand everything better. –  Albert Einstein