In 2012, New Hope Audubon funded a project placing Barn Owl boxes in appropriate habitat. Barn Owls have been almost extirpated from the local area, the result of forest regeneration, development, rodenticide use, changes in farming practices, and other factors. Nest boxes have been shown to improve breeding success in states with similar farm intensive habitat, such as Pennsylvania and California. Because BARN Owls (not to be confused with the locally common BARRED Owls) require vast areas of healthy grassland, boxes were placed on public lands and large local farms. The entire project, including the site locations for the boxes, is well documented in my blog: piedmontbarnowls.blogspot.com. 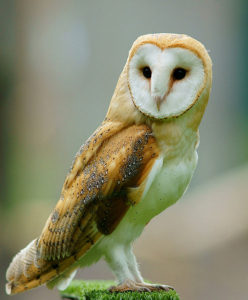 It’s too soon to say if the project, completed in 2015 with some additions, has been a failure or a success. Two confirmed sightings are all we have to date, and nesting has yet to be observed. It’s quite possible that there are too few owls to constitute a breeding population in our area, and it may take years for juvenile birds to establish territories during dispersal events.

Barn Owl programs have been implemented on the NC coastal plain and in the mountains with some success. It’s likely that the owl populations in those areas were healthier in the first place. Yet there are many areas in the central and western parts of the Piedmont that have good habitat for these elusive birds. Because of increasing human population pressures and the loss of wide, open grassland areas where Barn Owls can thrive, it’s imperative that conservationists pay attention to the needs of these birds in the central region of the state.

A couple of Audubon chapters have shown interest in our program, and at least one, Cape Fear Audubon, has agreed to put up boxes of their own. Without a commitment, though, from state and local Audubon chapters, it’s unlikely that resources will be spent on Piedmont habitat conservation, as much of the statewide focus is on coastal and mountain projects. Luckily for us, the North Carolina Wildlife Resources Commission (NCWRC) has recently taken notice. 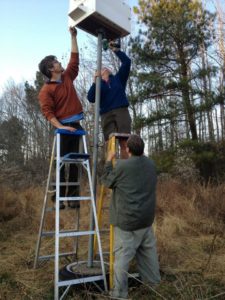 I had lunch recently with Allison Medford, a bird and mammal specialist with NCWRC, and an avid young conservationist. Her agency has decided to expand efforts for Barn Owl conservation in the Piedmont, building on a similar project they implemented in the mountains of our state. We instantly connected on our mutual love for these strange owls and and concern about diminishing grassland habitat. We discussed the urgency to highlight Piedmont conservation in particular, as areas around Charlotte, Greensboro, Winston-Salem, and the Triangle continue to grow much faster than the national average.

To make a long story short, the Piedmont Barn Owl Initiative, started with funds from New Hope Audubon, is about to fledge. Allison and the NCWRC will soon be monitoring our local boxes as well as putting up boxes in appropriate habitat going westward. State funding means better resources for surveying habitat, better opportunities for proper land management, and professional expertise.

Some of the counties west of the Triangle, in traditional farming areas, have had healthier Barn Owl populations historically, due to better habitat. Indeed, the best chances at attracting breeding owls locally appears to be in the western part of our area, in the Silk Hope area of Chatham County and the Snow Camp area of Alamance County. There is plenty of similar habitat in the areas north of Charlotte, south of Greensboro, and up towards Hickory. Getting local farmers educated on the issue and promoting the rodent control benefits associated with this species will be a focus of Allison and her team. 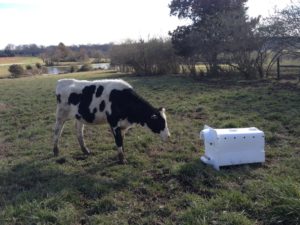 One of Our Official Inspectors

I am very excited to be consulting with Allison on this new state funded project. I’ve even offered to bring my PowerPoint presentation to Ruritan Clubs and the like. Personally, I’m just happy that the plight of the Barn Owl is on the state radar, and that Piedmont habitat is part of the discussion. I will let you know of future developments as they come available.