Song of the South 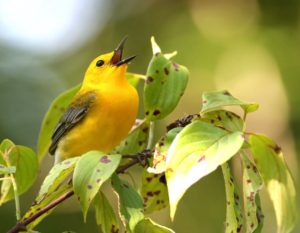 Spring is upon us, and for every southern birder, from novice to expert, there’s a marker that heralds the true arrival of the season. Birders, who travel the globe in pursuit of the rarest species, still wait and seek out the arrival of the first Prothonotary Warbler of the breeding season. The bird is familiar and beloved. We are lucky. Here in North Carolina we all know where to find our Prothonotary. The bird makes it pretty easy. Locate a good swamp with half-dead trees anchored in a stagnant soup, and you have the perfect locale for a Prothonotary. The song is as bold and relentless as the singer. A loud repeated “sweet sweet sweet sweet” rings out, and next thing you see is a bullet of neon yellow zipping past the water to oust an intruder. This medium sized warbler has a Chuck Norris personality. I’ve witnessed housing disputes with other cavity dwelling birds, and the Prothonotary wins the day every time. 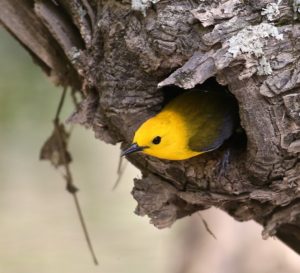 Cavities over water are valuable. They offer safety from parasitic Cowbirds. Raccoons and snakes often predate Prothonotary nests, but the water affords some protection especially if the cavity is as deep as nine inches, as this excludes the raccoon. The water itself discourages a Cowbird, because the Prothontary fledgling has the ability to flap on the surface of the water like a hovercraft until it reaches land. Cowbirds fledglings sink. Studies done in Texas indicate that in years when the floodplains are dry, the population of Prothonotaries plummets. Here in North Carolina we don’t think of this bird as endangered, but given its specific habitat requirements, these birds are in serious decline due to the loss of lowland forest and wetlands in breeding areas, and a loss of mangrove swamps on its wintering grounds. The competitors for these choice spots include Tufted Titmice, Carolina Chickadees, and Eastern Bluebirds (species not known for shyness) but if you’ve ever witnessed one of these housing wars, you would realize that the warbler would inevitably vanquish his opponents.

Around humans, there can be an un-warbler like boldness. You might be standing quietly, and suddenly find yourself getting a curious stare (at a distance of four feet) from a bird of astonishing beauty. The yellow is so vivid that it appears beyond nature’s palette, the eyes large and dominating, as black as India ink. The wings are a deep blue-grey, in startling contrast to the brightness of the head and abdomen. The male has a back patch of rich olive. Females are more mildly marked, with quieter olive undertones to the overall plumage. 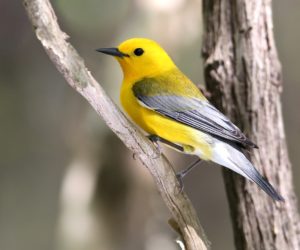 You’ve probably heard the story about this warbler’s common name. A Prothonotary is a highly-ranked prelate of the Catholic Church. Supposedly, the bird got its name from the golden hood worn by this papal appointed official. A great story, except that a Catholic Prothonatary wears purple. The official insignia of the Prothonotary Apostolic even includes a large purple hat (known as a galero).

Local sightings of our swamp warbler (sans galero) have included Mason Farm, Jordan Lake, Bynum Bridge, and Sandy Creek. Pay particular attention to the flood pools that edge Jordan Lake, as these spots have been productive for years. In some locales efforts are being made to help the species by installing nest boxes appropriately sized for warblers, much the same way we place Wood Duck nest boxes over water. It isn’t entirely clear why the warblers numbers have declined by 40% since the 1960’s, but the loss of land, coupled with the partitioning of forests could be significant factors. 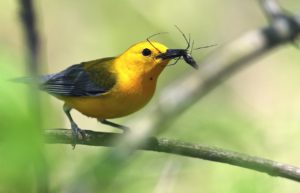 In years past, I have counted on seeing one particular Prothonotary who occupied the water ditch trail along Mason Farm. He was well known to a host of faithful followers, because he didn’t care a whit if you were in his company. Directly in front of his fans, he would glean fat spiders from the gnarled low trees in the ditch. We could watch him check each potential nest cavity as he made his spring rounds, and late in the season, we would watch him drive off an unsuspecting Northern Parula as he guided his fledglings around his domain. This year, after four seasons of his company, he failed to arrive. It surprised me how much I miss his bright presence.