The Texas coast is a world-famous birding site during spring migration and a key area on the flyways for migrating birds. Migrating birds are exhausted after their flight across the Gulf of Mexico and need places to stop and gather strength for their continued trip northward, making the parks and preserves that offer them food and resting spots on the Texas coast vital to conserve.

If you are considering birding the southeast Texas Coast during spring migration, check my favorite birding spots. That is where I learned birding and was out every weekend during winter, spring and summer. Here are the best spots I found going from east (the Sabine River) to west in the Houston/Freeport area.

[**Driving routes/suggestions are indicated with asterisks below.]

Sabine Woods – (Just west of Sabine Pass on Hwy 87) This is a remarkable area with many warblers, vireos and other birds. There is very open canopy so birds are easy to find. There are also some brushy areas harboring other species.

Sea Rim State Park – (further down Hwy 87) An area just past the main park entrance, The Willows, is especially great during migration. It is a boardwalk through a small marshy area with lots of willow trees and lots of warblers.

**On the way to Sabine Woods you will pass a shipyard next to a high bridge where semi-submersible drilling rigs are maintained. These are rigs that float on deep water to drill at water depths not attainable by more conventional drilling rigs. They maintain their position over the wellhead by deploying multiple anchors or by dynamic positioning. Dynamic positioning means using propulsion systems to maintain their position. As you approach Sabine, you are likely to see “jack-up” drilling rigs. These are rigs that have a platform over very long legs. They are towed into position over a well and then jacked above the sea on the legs. The rig hovers over the edge of the platform and over the well for drilling.

**Drive Highway 73 between Port Arthur and Winnie and take Highway 124 South out of Winnie.

Anahuac (pronounced an-a-wack) National Wildlife Refuge – This is a fantastic area with impoundments for waterfowl and wading birds (and alligators), some grassy areas and a small area of willows and other trees with a small lake. Don’t miss Shoveler Pond which has a viewing platform on the west side and the willows. Stop at the visitor center and ask the volunteers where the activity is and what species are being seen. This is prime habitat for rails and you might see several species. 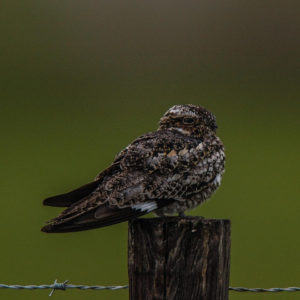 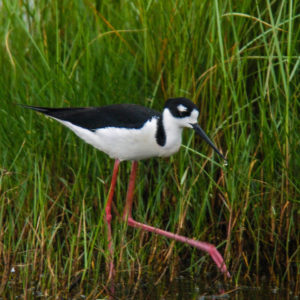 **High Island and Bolivar Flats are managed by the Houston Audubon Society and they charge admission during spring migration ($5 a day when I was there).

High Island – This is a mound of earth pushed up by a large underground salt body that was squeezed up by the heavier rocks and other earth material. The surrounding area is all marsh. As such, it is arboreal and a haven for those birds needing the environment of trees for refuge and to find food. There are two fantastic areas on High Island for birding: 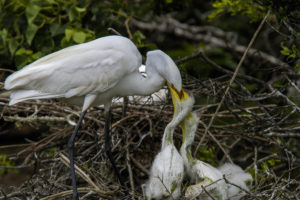 **Proceed to the gulf on Hwy 124 and follow Hwy 87 to the west to Bolivar Flats. There are a few spots along the way that might have some interesting birds.

Bolivar Flats – This is a mud flat formed at the mouth of Galveston Bay by sediment from the Trinity and San Jacinta Rivers. You will find many shorebirds here. Ask volunteers at Boy Scout Woods at High Island if there are any active sites along the drive worth visiting. When I was there, you could drive down on the beach. They may now require a permit to do that. Ask volunteers at Boy Scout Woods. 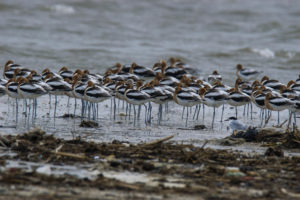 **Depending on your schedule, you may want to visit these areas in this order: Anahuac, High Island, and then Bolivar Flats. After leaving Bolivar Flats, you can cross Galveston Bay to Galveston Island on the free ferry. The ferries run regularly, but there may be a wait, depending on the time and day of the week. If you opt not to take the ferry, the drive around Galveston Bay back to High Island and Winnie is quite long.

**Once on Galveston Island, follow Sea Wall Blvd and San Luis Pass Road to the end of the island and cross the pass to Hwy 257 toward Surfside Beach. From Surfside Beach, turn north on Hwy 332 toward Freeport. Turn right on Hwy 523 to go to Brazoria National Wildlife Refuge.

Brazoria National Wildlife Refuge – This is the first place I ever birded. It was winter and there were many varieties of waterfowl. I was hooked. Roads around the impoundment make driving and seeing birds easy. There is a small lake next to the visitor center and a trail through a wooded area. There is also a photo blind. (I never made it to the blind, so I don’t know what it offers. I tried one time and was walking over a small levee, watching for birds in the reeds on either side, when I looked up and discovered a very large alligator about 10-15 feet away! Needless to say, I stopped and backed away slowly).

**After visiting the refuge, return to Freeport and take Hwy 1495 to Quintana and Hwy 723 to the east to reach the Quintana Neotropical Bird Sanctuary.

Quintana Neotropical Bird Sanctuary – This is a very small (maybe 1 acre) wooded area in the midst of sand dunes and marsh but is a spot that should not be missed. Since it is the only wooded area around, you will find many woodland species here. There are a number of species that I have only seen here. There is also an area of brush and reeds next to the wooded area, which increases the species diversity here. 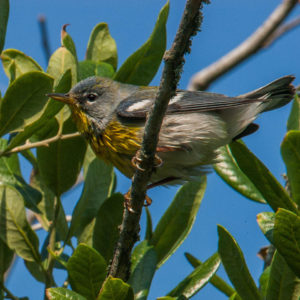 Quintana Xeriscape Nature Preserve – Just a short walk (or drive) down the road, this is a brushy area that is a refuge for species needing that environment. You may have to look harder to find the birds, but it is worth the visit.

Freeport Ship Channel Jetty – If there is a “fallout,” you may find birds stopping here for a rest. There will also be some water’s edge birds along the jetty and on the beach next to the jetty.

Brazos Bend State Park – This was one of my favorite spots to spend a day as I lived only about 20 minutes away, and it has great habitat for wading birds and alligators. I usually parked at the first area just inside the park. There is a small lake there called 40 Acre Lake. You can walk out on a viewing platform and see a variety of wading birds. Then walk counterclockwise around the lake. There are woods on the opposite side of the trail. You will come to an observation tower that offers a good view of marsh opposite the trail that continues around the lake. 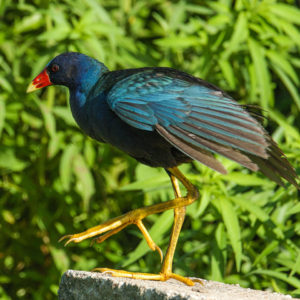 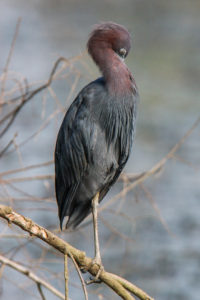 Instead of continuing around the lake, turn and go in the opposite direction through woods (Spillway Trail) to another larger lake (Elm Lake). You will likely see Purple Gallinules, Common Gallinules, and American Coots, as well as other wading birds. Walk around this lake in either direction. After completing the circuit of the lake, return to the tower and complete the circuit around the first lake. You will find the marshy area to the right of the trail and might see rails, bitterns, etc. Be careful here as you are likely to find alligators sunning themselves on the trails or adjacent to the trails around the lakes.

There are other trails in the park. Be sure to stop at the gate or at the visitor center and ask about activity along the trails. At the Creekfield Lake Nature Trail, you may see alligator nests in the small lake.

The following websites may be very helpful. Also feel free to contact me via email at: tjgriffin2@earthlink.net