It is very hot here, yet the birds are still very active and are eating me out of suet and seed! We are providing two cakes of suet every day to several species of woodpeckers, including Red-bellied, Hairy, and Downy Woodpeckers, that regularly come to the suet feeders and are still bringing their young. Other birds, including Gray Catbirds, White-breasted Nuthatches, Eastern Bluebirds, Pine Warblers, American Crows, Common Grackles, Tufted Titmice, Pine Warblers, and Brown Thrashers, are also eating suet. What birds dine at your suet feeders?

We are having a problem with our crows. We have both Fish and American Crows at our feeders. Both are eating so much food that we can’t keep up. Also, they are chasing away the other species. Can you tell the difference between these species? Why not ask the crows? Just ask the crow, and if it replies “uh-uh”, it has just confirmed it is a Fish Crow; if it replies with a caw, then it’s an American Crow. 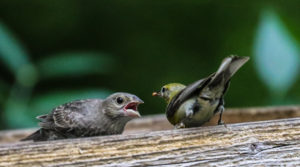 While sitting in our backyard waiting for some hummingbirds to show up, Barbara saw and photographed a disturbing sight. A Pine Warbler was feeding a baby Brown-headed Cowbird, which was a least twice as large as the warbler. The cowbird was actually doing well and feeding itself on the platform feeder, but the “step-parent” kept wanting it to eat suet it was delivering. As you probably know, female Brown-headed Cowbirds lay their eggs in the nests of other birds and skip-out on the chores of raising their own young. Some species of birds whose nests are invaded have learned to deal with it by pushing out the foreign egg or even building another nest on top of it, but some, like this Pine Warbler apparently have not. 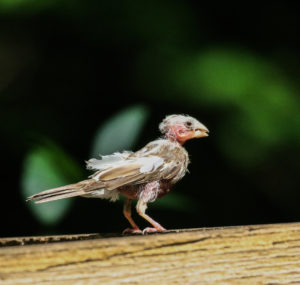 At this time of year, many of the birds, especially Northern Cardinals, may appear scraggly as they are molting into their new plumage. The Northern Cardinals can sometimes lose all their crown feathers and appear bald; not a pretty sight! The molting process is gradual and may take several months. During this time, the cardinals will continue to look sickly, but don’t worry. They are fine. During the winter, the juvenile birds will molt into their adult plumage for spring.

Some people don’t believe in feeding birds during the summer, since they think they will become too dependent and instead should be getting their food from natural sources. However, keep in mind that humans have destroyed much of the native plant and insect habitat for birds, so one could also argue that you are making up for this loss by providing supplementary feed. Also, some worry what will happen to birds when the feeders go empty when they’re away. But the birds will be fine since they typically roam during the day using multiple feeding sources and are not dependent just on yours.

Whether you feed the birds or not, do try to provide them with fresh water. Not only do they need water for drinking, but they also bathe in the water. Even giving them water using an old plate will help them. Change the water every day or two to keep the water fresh and so that mosquitoes don’t use it to breed. Birds must have access to water to survive the heat.

If you have unusual bird sightings at your feeders or any questions about feeding birds, then please contact me at spttdrdshnk@yahoo.com!