North Carolina’s swift species, the Chimney Swift (Chaetura pelagica), is one of four species found in the United States. The other three are the White-throated, Vaux (pronounced “vox”), and Black Swifts. Chaetura means “bristle-tailed” and pelagica means “of the sea,” but refers to the nomadic, wandering nature of this bird. The easiest way to identify Chimney Swifts in the air is their cigar-like appearance. Chimney Swifts are bluntly tapered on both ends and have long, narrow wings adapted for quick maneuvering to capture insects, their primary diet. 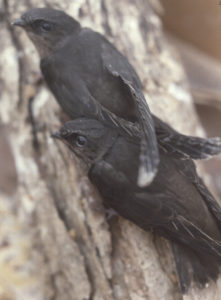 Though agile on wing, Chimney Swifts are weak at perching. That’s why they need a hard, bristled tail to prop themselves upright when roosting on a vertical surface, such as a chimney, for the evening. Except for roosting and nesting, Chimney Swifts spend their lives in flight. Despite resemblance to swallows, which similarly seem to be in perpetual flight, these two kinds of birds are not related. In fact, swifts have a closer kinship to hummingbirds than to swallows, both being of the Apodiformes order. However, swift and swallow similarities in on-the-wing foraging behavior and morphological appearances are a good example of convergent evolution — independent development of similar characteristics among animals that are not actually closely related.

The name “Chimney Swift” obviously indicates a relationship with chimneys. However, before the arrival of European colonists and extensive logging of eastern forests, Chimney Swifts primarily nested and roosted in natural spaces such as tree cavities. Fortunately for the survival of the species, Chimney Swifts and their cousins have adapted to using artificial structures such as chimneys, air vents, silos, and other spaces now used as their home. 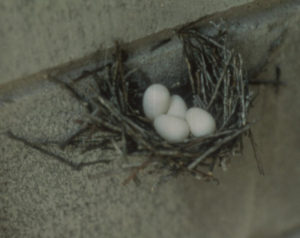 Swifts are known to be monogamous for many years, and family groups will stay together to assist in rearing new generations. A characteristic mating behavior involves one bird pursuing the other in flight with wings raised in a “V” formation, gliding in tandem. Once paired, swifts nest from May to July throughout the United States. Only one pair will nest per site, so you would not see masses of Chimney Swifts preparing to roost in the spring as you would in the fall. Nests are built in a half-saucer form from small twigs and saliva. The nests are typically four inches wide and about an inch tall. Clutch size (the number of eggs laid per brood cycle) typically ranges from three to six eggs. Both parents incubate eggs for about three weeks. When eggs hatch, the young remain in the nest for about another three weeks. After fledging (leaving the nest), the young will remain in the chimney for about 10 days, meanwhile practicing their flight by climbing and fluttering. About 30 days later, the young swifts will leave the chimney, take to mature wing, and remain in flight for most of their adult life. 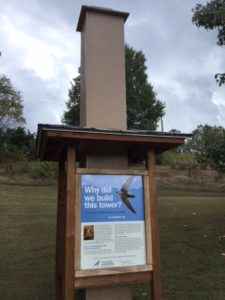 Though we now know that Chimney Swifts’ range from Canada to Peru (depending on the season), we did not know about the extent of their amazing migratory journey until the 1940s. Throughout the 1930s and 40s over 375,000 Chimney Swifts were tagged, primarily by a Boy Scout leader and troop volunteers in Memphis, Tennessee. These efforts were rewarded in 1944 when native tribe members in the Amazon River basin of Peru captured 13 Chimney Swifts. Noting the unusual band on their legs, the tribe members brought the swifts to the attention of local authorities, who relayed the discovery to the United States embassy in Lima. This discovery was subsequently shared with the Smithsonian Institute, which traced the tag source to Tennessee, thus solving an old mystery thanks to citizen science.

Despite their impressive migratory feat, Chimney Swifts are vulnerable to increasing pressures. Foremost in this crisis is the loss of habitat. In the case of Chimney Swifts, that means losing human-made nesting and roosting sites. Many chimney companies market services against Chimney Swifts as “pests.” This is patently false, as swifts create little damage when managed with simple care. Uncapping your chimney during nesting/roosting season doesn’t take much effort, and you can restore your cap in the fall and winter seasons to keep out less desirable critters such as squirrels and raccoons. Moreover, Chimney Swifts are protected by the federal Migratory Bird Treaty Act, so removing them from your chimney while they nest or roost is illegal. In addition to losses from capping chimneys at houses, swifts are also losing historical nesting and roosting sites at public buildings.

A few collective pronouns that describe a large group of swifts include: a box, drift, screaming frenzy, and swoop — or you can just call them a flock. The spectacle of a massive flock only occurs in the late summer and early fall. At that point, Chimney Swifts are well past their breeding season and instead focus on fueling for their long southern journey. Before their departure, hundreds to thousands of swifts stage their journey by roosting communally. The formation of such a roost seems random at first. A few stray swifts fly overhead, dodging each other, calling to each other, and catching insects on wing. As dusk approaches, the number of swifts flying overhead increases. Eventually a large volume of swifts form a sequence of ephemeral, vortex-like movement above their roosting site. As night falls, a few swifts will drop from their vortex into the chimney. Finally, enough swifts drop out that they trigger a critical mass of birds roosting in rapid succession, appearing to be sucked into the chimney. By dark the Chimney Swifts securely rest in the confines of a densely packed roost. 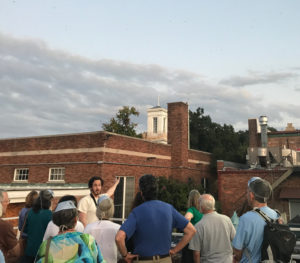 In response to the hardships facing Chimney Swifts, New Hope Audubon Society’s Conservation Committee formed a Chimney Swift conservation initiative. This program involves identifying active and historical nesting or roosting sites, then approaching site managers to engage in conservation measures. If you happen to know an active or historic roosting site, please reach out to us at newhopeaudubon@gmail.com. Our Conservation Committee’s most recent action involved engaging the Town of Chapel Hill. Fortunately for New Hope Audubon Society, Mayor Pam Hemminger and John Newark, Sustainability and Facilities Management Superintendent, were not only sympathetic to our cause but also highly supportive. The Town of Chapel Hill has a unique, historical roosting site at a chimney connected to the U.S. Post Office & Courthouse off East Franklin Street. Knowing this, the Conservation Committee approached the Town of Chapel Hill to uncap the chimney at this site to allow seasonal roosting. After swift town approval, a dedicated team of New Hope Audubon Society volunteers nightly visited the chimney site for Chimney Swift call playback. This action gradually attracted Chimney Swifts to their historical roosting site, with a peak evening so far of 1450+ birds. In coming years, we expect swift numbers to increase to a spectacle of thousands of roosting birds. Such an achievement could not happen without help from John Connors, our Wake Audubon Society partner, and our own Barbara Driscoll, Conservation Committee stalwart. 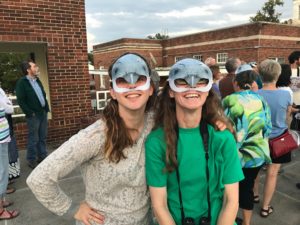 When the Chimney Swifts depart for South America sometime this October, New Hope Audubon Society can be proud of its efforts to assist the survival of this magnificent species. The Town of Chapel Hill will cap the chimney for the fall and winter season, but come next spring they will uncap it to allow another cycle of life for our winged friends.

Cornell Lab of Ornithology, All About Birds. (2017). Chimney Swift. Retrieved from https://www.allaboutbirds.org/guide/Chimney_Swift/id

NC Museum of Natural Sciences. The Tale of the Swift [fact sheet].