I have a farm on my property called Red’s Quality Acre, named after the red-haired people who run it, Dave Henderson and Caitlin Law. We have set up a CSA (Community Supported Agriculture) and supply organically grown vegetables to about 200 customer shareholders. We also supply veggies to local stores and restaurants.

At Red’s we hardly ever use pesticides, even organically approved ones. We don’t need to. In the healthy ecosystems we farmers work hard to maintain, plants can usually deal with the occasional pests that do arrive. I spent a couple of hours taking photographs to document one such healthy ecosystem—in our cucumber hoop house. 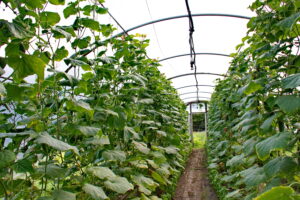 We start our own cucumber seedlings and transplant them into the hoop house into prepared beds, where they climb up strings suspended from the purlins. 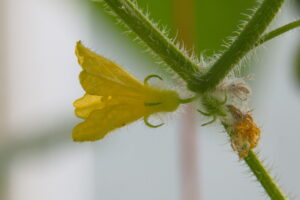 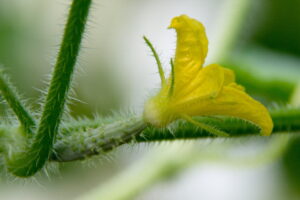 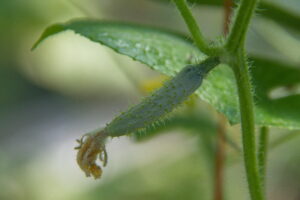 When the flowers fade, the baby cucumbers start to grow. 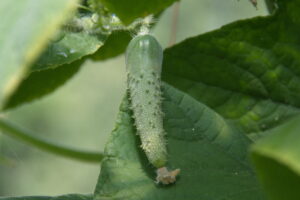 And grow. In just a few days after they are pollinated, the cucumbers are adolescents, with the old flower still attached at the tip. 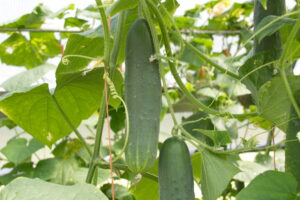 And grow. After another few days, the cucumbers are ready to pick (still with the old flower attached). 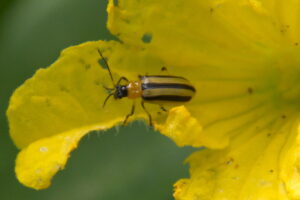 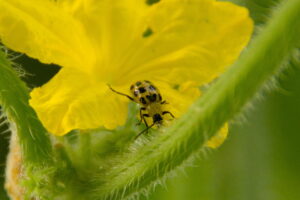 In summer, the doors and side walls of the hoop house are open for ventilation, which permits insects and other critters to come and go as they please. Striped and spotted cucumber beetles like the pollen, but they also like to chew on the leaves, stems, and even the cucumbers themselves. What is worse, they spread a disease called bacterial wilt that can kill the whole cucumber plant. That does not endear them to farmers. 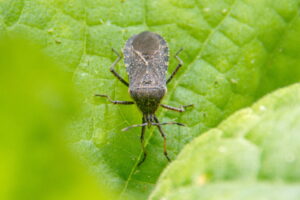 Squash bugs get in, too. They have piercing mouth parts that they use to suck sap from the leaves. They also can transmit a bacterial disease from plant to plant. 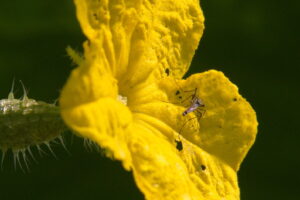 Asian tiger mosquitoes aren’t welcome in the hoop house. The males suck sap like stinkbugs, though they probably don’t take too much. The females, of course, suck blood from passing mammals, including farmers. These invasive mosquitoes may also act as vectors for various diseases. 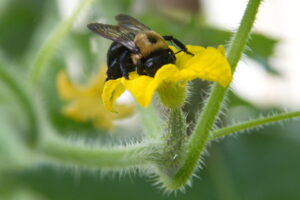 Carpenter bees (related to bumblebees) enter the hoop house to gather nectar from the flowers. In doing so, they transfer pollen from the male flowers to the females. Note the baby cucumber at the base of this female flower. I’ve never been stung by a carpenter bee. If I approach too closely, they simply fly away a bit to another flower. 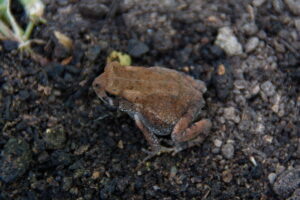 This young American Toad is another garden friend who will grow fat and happy feasting on insects in the hoop house. 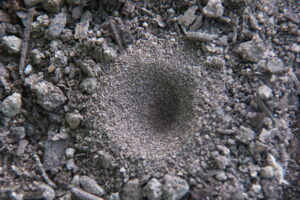 Also at ground level are antlions, the larval stage of lacewings. These voracious predators build funnel traps and hide in the sand at the base. When an ant wanders into the funnel, the antlion throws sand at her until she falls to the bottom where it can grab her and eat her. 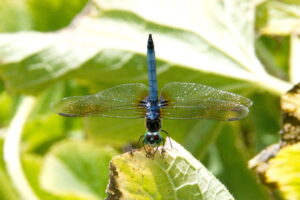 Sometimes even blue dasher dragonflies wander into the hoop house. They perch on a leaf watching for insect prey to fly by. 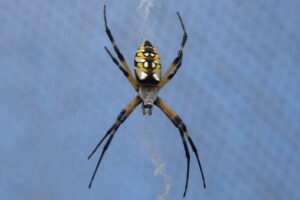 Yikes! This common garden spider looks like she could cause some trouble. Her body is about an inch long—plus all those legs! But she is one of the good guys in a Red’s hoop house ecosystem. She’s not at all interested in biting humans, unless they try to grab her. She scoots up on the top of her web and hides when we approach. 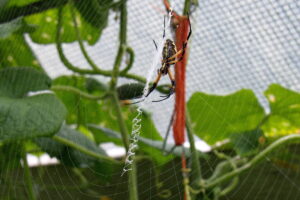 Notice the zigzag pattern in her web; it seems to say, “YUMMM.” Perhaps that means, “Cucumber beetles are delicious.” Garden spiders always build this thicker bit of webbing into their overall orb. 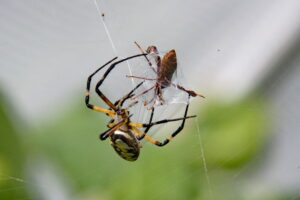 A leaf-footed bug (related to squash bugs) has just flown into this garden spider’s web. After injecting it with venom, she wraps it in special spider silk to immobilize it. Once her victim is secured, she leaves it alone to die as spider venom starts digesting its innards. 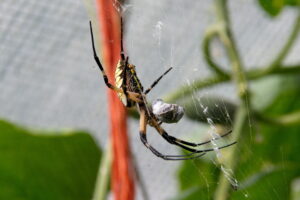 Here she is feeding on the leaf-footed bug. After many meals like this, she will be ready to mate. 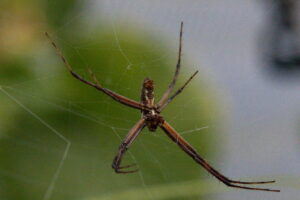 Here’s a male garden spider waiting on the outer fringes of the female’s web. He’s much smaller, long and skinny. He gets food from some of the prey the female catches—a freeloader, of sorts. At some point, he will know that she is ready to mate, probably by sensing pheromones (odors) that she releases into the air. After they mate, she will most likely kill and eat him, using that extra nutrition, along with her stored fat, to make lots of eggs. 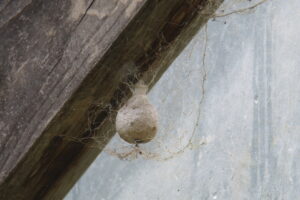 When the eggs are fully formed, she puts them in an egg sac like this one that is hanging from a hoop house rafter. The eggs over-winter in these sacs. In the spring the next garden spider generation will emerge to help protect next year’s hoop house crops.