Who Knew This about Bluebirds? – Not Me!

An American song praises the bluebird of happiness and Cole Porter encouraged us to “Be like the bluebird.” This little bird’s attractive appearance and willingness to be near humans have undoubtedly contributed to its popularity. Even Audubon spoke of the bluebird as “a lovely bird … full of innocent vivacity.” I recently learned, however, that all is not sweetness and light in the bluebird world. 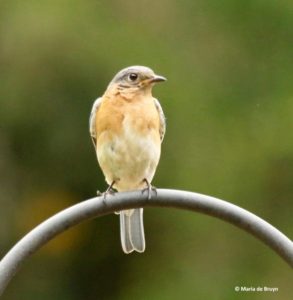 This year, a bluebird pair in my yard first had a nest with five eggs, which produced four fledglings. Their second brood produced three nestlings, one of whom died, as only two made it to fledging status. The parents made it obvious that they can be very feisty as they were dive-bombing the blue jays that were near the nest box on the day that the young were to emerge. 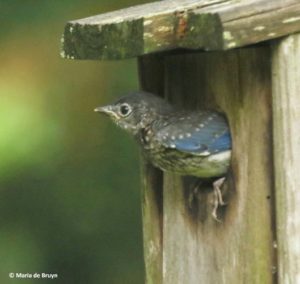 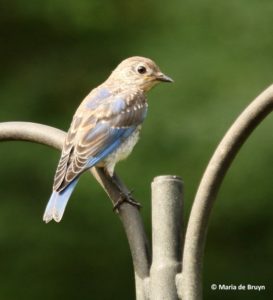 The productive couple then switched to a nest in a different box. And I finally saw a few juvenile birds, who began visiting the front yard feeders. In contrast to previous years, however, the parents were not feeding them. On the contrary, these juveniles confronted a problem because the adult birds were swooping in and chasing them away, a behavior I had not witnessed before. Trying to photograph the behavior was difficult as it happened suddenly and quickly each time. 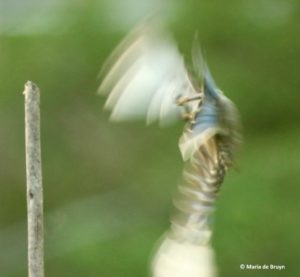 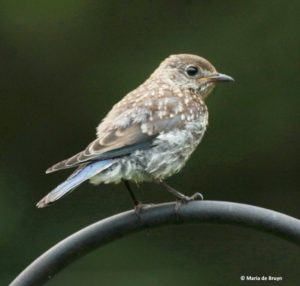 Online research revealed that adult bluebirds do sometimes attack one another (most often, males vs. males and females vs. females). Both males and females will attack young birds, however. The male appeared to go after the juveniles frequently, but the female made an occasional foray against them, too. Such aggression towards juveniles has usually been observed when the parents are feeding nestlings from their first or second broods, and it is speculated that the hostility is related to competition for food during nesting season.

The aggression suffered by these young birds seems to fall a bit outside the usually observed accounts. The parents began chasing them off when the third nest had been built but no eggs had been laid yet. Ultimately, the nest had four eggs and while mama sat on the nest, papa kept an eye on the feeders to see if the juvenile birds were anywhere near. 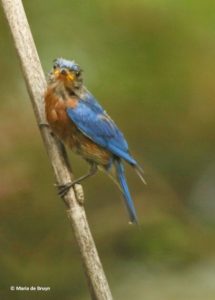 After mama had been on the nest for about a week, papa bluebird stopped chasing the juveniles away every time he saw them. Perhaps it was too tiring or he realized there was enough food for everyone. It will be interesting to see what ensues when the third brood fledges. And hopefully all the young will end up as happy bluebirds!

All photographs by Maria de Bruyn.