[Part 1 in this series of articles covered background information on the Jordan Lake bird counts and discussed the long-term data for several species of birds that are closely tied to the lake itself. Click or tap here to see that article.]

The 15-mile diameter Jordan Lake count circle includes more than just the immediate environs of the lake itself. There are wooded areas, open fields, residential areas, and stream and river bottom habitats as well. Of course, the count circle encompasses a lot of private property, but our intrepid counters do their best to cover as much of the accessible land areas as they can. This article looks at woodpeckers, a group of birds that includes species that inhabit upland and river bottom habitats, deciduous and pine woodlands, wetlands, and residential areas. In short, one or several of these species are found throughout the count circle, except perhaps in the middle of the lake.

Most, but not all our woodpecker species are year-round permanent residents. The two exceptions are Northern Flickers and Yellow-bellied Sapsuckers. Flickers do breed here, but their numbers increase in the non-breeding seasons, augmented by migratory individuals who come south for the winter. Sapsuckers migrate into our area for the winter but are absent during the breeding season. 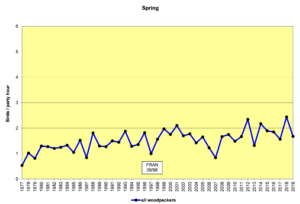 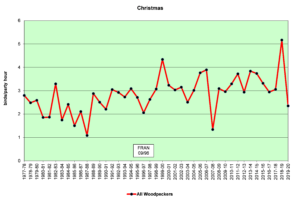 [These and subsequent graphs use ‘birds per party hour’ vs. time. This helps in comparing data because time spent in the field by counting teams varies from year to year. Spring bird count graphs (SBC) are yellow; Christmas bird count graphs (CBC) are green.]

Figure 1 is a graph of the spring bird count (SBC) data for all woodpecker species taken together, and Figure 2 is for all woodpeckers found on the Christmas bird counts (CBC). These numbers have fluctuated quite a bit over the years. Can we speculate on the reasons for the peaks and troughs?

In September 1996, Hurricane Fran came inland and hit the Piedmont of North Carolina hard. Many trees were blown over and killed. Could that have been the cause of the low numbers of woodpeckers the following year—i.e., were many birds killed by the storm? Note that woodpecker numbers climb in the next few years. Could all those dead trees have been harboring insects that became food for the remaining woodpeckers? In an abundance of food, birds typically lay more eggs and successfully raise more babies. It is nice to think that the population levels did respond to better conditions and came back to their stable numbers.

However, now consider the very low numbers in SBC 2007 and CBC 2007-08. There were no hurricanes or other adverse weather events prior to those low counts. On the other hand, we fielded fewer counting parties than average for the SBC 2007 count, so the coverage of some sections of the count circle was lacking. And we suffered from cold, very rainy conditions during the CBC 2007-08 count. Some parties even missed species like chickadees, towhees, and cardinals. This illustrates the problems that arise when trying to speculate on the reasons for high or low numbers in any given year. 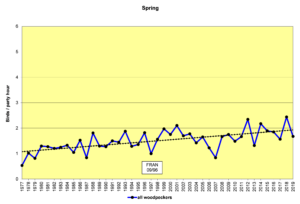 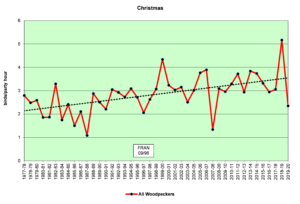 Figures 3 and 4 show these same data with the addition of trend lines that indicate a gradual increase in overall numbers of all woodpecker species over time. Why? “Why” questions are difficult to answer for biological systems in general and for populations in particular. The external influences on these systems tend to be complex. Are there more, older trees now than 40 years ago? Do those trees harbor more insects for woodpeckers to eat? Have there been changes in land use practices in the count circle over these 40+ years—for example, are there now more residential areas with trees and fewer farms with their open spaces? Also, why have more total woodpeckers been observed in winter than in spring?

Some of our woodpecker species are quite common, while others are relatively uncommon. It might be helpful to look at individual species as opposed to aggregating them all together. Perhaps we might find answers there. Of course, more questions might then arise. (The graphs below all use the same vertical scale for ease of comparison. Note however that it is different from the scale used in the previous graphs because the numbers are lower.) 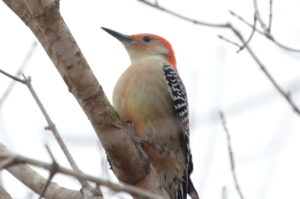 Our most common woodpecker species is the Red-bellied Woodpecker. The red belly on these birds is not always easily seen, and in fact it may be absent altogether in females or young birds. The male in Figure 5 is showing his red belly quite prominently. Red-bellieds are generalist woodpeckers, feeding on fruits and acorns as well as insects. They typically do not drill into trees in search of prey. They also do quite well around humans and human-made changes to the environment—residential areas, parks, etc. (Miller, et al., 2020). 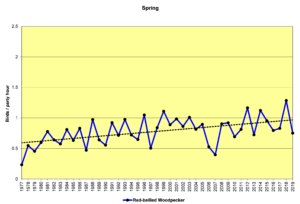 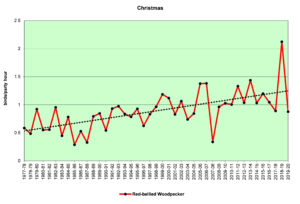 Figures 6 and 7 are graphs of the spring (SBC) and Christmas (CBC) counts, respectively. The trend lines show that the population of this species has been increasing steadily over the years. Some dips occur in the numbers, but whether these are related to hurricanes or to weather constraints on observers is difficult to discern. The overall trend, however, clearly indicates increasing numbers. 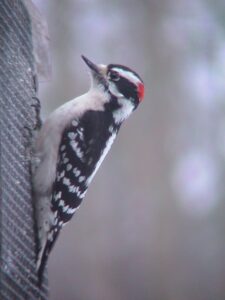 The next most common woodpecker in our area is the Downy Woodpecker. It is our smallest woodpecker and feeds on a wide range of insects, gleaning them from surfaces and crevices in branches as well as drilling shallow holes in trees to find them (Jackson and Ouellet, 2020). 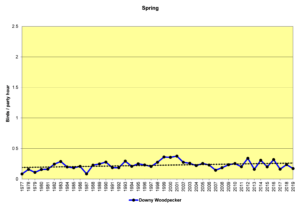 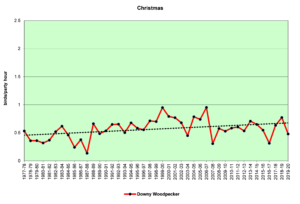 Figures 9 and 10 show that the population of Downys has remained quite stable over the years. A bit of a rise in the winter numbers can be seen, perhaps due to increases in numbers of young birds post-breeding. However, winter mortality seems to drop those numbers back so that the breeding population appears fairly constant. 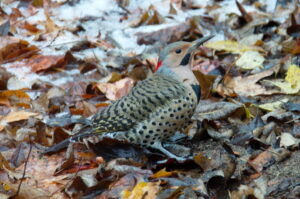 Our other relatively common woodpecker is the Northern Flicker, also sometimes called the Yellow-shafted Flicker, referring to the bright yellow feather shafts in its flight feathers. Flickers are migratory, and although we do have breeders here in the spring and summer, their numbers swell in winter when migrants from further north arrive in the fall. Though flickers nest in tree holes like other woodpeckers, they spend most of their feeding time on or near the ground where they forage for ants and other ground-dwelling insects. 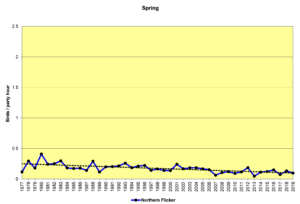 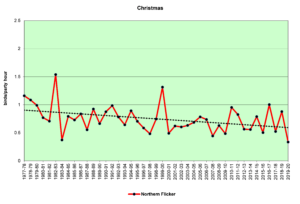 A look at Figures 12 and 13 reveals that although this species is considered abundant, its number are clearly declining, both in the breeding season and in the winter. This trend appears to be true throughout its range, not just in our count circle (Wiebe and Moore, 2020). Habitat changes due to human activities and competition for nest holes with European Starlings are likely explanations. 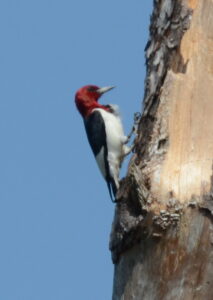 The Red-headed Woodpecker is not as common in our area as in other parts of its range across North America (Frei, et al., 2020). However, its numbers here have shown a fairly steady increase during the course of our local data-gathering (Figures 15 and 16). 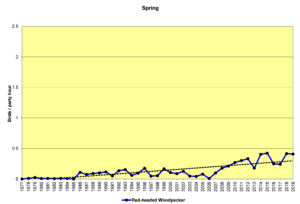 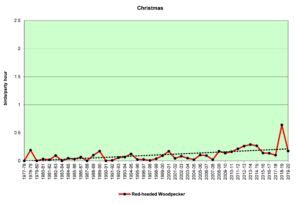 Red-headeds are hole nesters, being particularly fond of dead trees and dead branches. After Jordan Lake was filled, many swampy areas were created around the edges and in creek and stream tributaries. Beavers have also moved in, further backing up water with their dams. The high waters in these areas resulted in large numbers of dead trees, and it appears the Red-headeds have taken advantage. 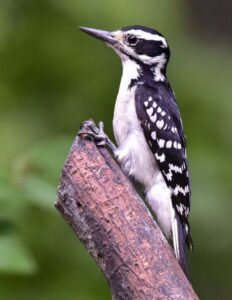 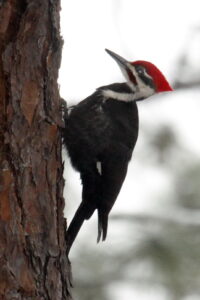 These two woodpecker species are permanent residents in our area, though in low numbers relative to the species mentioned above. Both species prefer more mature forests with older, larger trees. 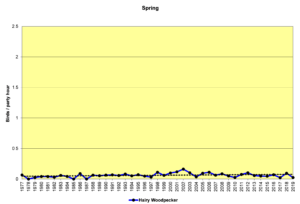 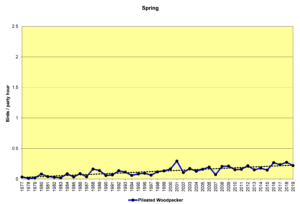 Figures 19 and 20 show that the population of Hairys has remained low but stable throughout the past 40 years, while the population of Pileateds has increased a bit. (The CBC graphs for these two species are almost identical to the SBC graphs.) Maturing forests in the count circle might account for the latter increase, but then why wouldn’t the former show a similar increase? 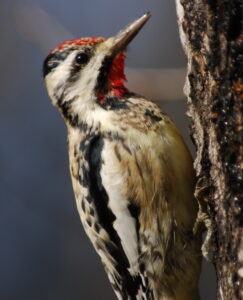 Yellow-bellied Sapsuckers come to our part of North Carolina only in the winter. They migrate north in the spring to breed. Yellow-bellieds are unusual woodpeckers in that they drill arrays of small, shallow holes in trees. These holes eventually exude sap from these ‘sapsucker wells.’ When the sapsuckers return to their wells, they drink the sap and eat any insects that have been attracted to the liquid. Other birds and even mammals take advantage of these special resources. 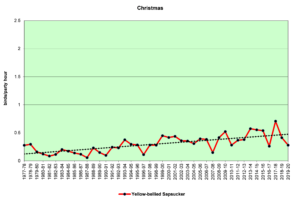 Figure 22 shows that this species has also been on the increase over the years. Whether this trend is due to increased breeding success further north or to increased attractiveness of out maturing forests is anybody’s guess.

It does not appear that we can attribute fluctuations in population sizes in the short term to particular events (e.g., hurricanes) because the variability of census coverage could be overwhelming those data. On the other hand, 40-plus years of data allows us to see trends in population changes that are not subject to short-term variations in censusing effort. The increase in woodpecker numbers (over all species) seems to correlate most obviously to the increase in numbers of Red-bellied Woodpeckers (compare Figures 3 and 4 with Figures 6 and 7). 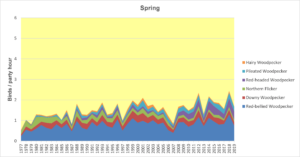 Figure 23 shows this relationship another way. The area under the line for each species represents its abundance. The species are stacked with the most common species (Red-bellied Woodpecker) on the bottom and the least common species (Hairy Woodpecker) on the top. Note that the area for Red-bellieds (blue) appears to be about equal to the sum of the areas of all the other species put together. Red-bellied Woodpeckers seem to thrive in areas where humans have reworked the landscape—residential areas and parks, for example—as well as in the forested areas common in the count circle. The increasing numbers of other woodpecker species contribute to the overall increase as well, but to a lesser degree.

Winter population numbers for all woodpecker species taken together (see Figs. 3 and 4) and for some particular species are greater than spring population numbers. The larger numbers on CBCs are probably due to young birds born during the previous breeding season. Winter mortality probably accounts for the decreases seen by the following spring. Though Northern Flicker numbers have declined, this decrease has not counterbalanced the overall increase in woodpeckers as a whole. Flicker decline is not a local phenomenon; it appears to be happening throughout the species’ range in North America.