Several species that we have been monitoring for the past 43 years have shown signs of declining populations. In general, this has not been a local phenomenon; these species are declining throughout their ranges. Our data show that we are part of a larger problem.

Several bird species require open or partially open habitats. Eastern Meadowlarks, for example, are a grassland species. If these grasslands are left undisturbed by humans, they change. A succession of annual and perennial plants moves in. A similar change occurs when cultivated fields are abandoned or grazing animals no longer occupy pastures. Trees and shrubs also take root, and over time, they come to dominate the landscape. These early successional forests tend to have open areas between the trees and shrubs and open canopies. Northern Bobwhites, Field Sparrows, and Prairie Warblers specialize in these habitats. Eventually, the trees mature and shade out the other plants, and a closed canopy forest ensues.

This succession from open land through second growth to closed canopy forest is common in the Piedmont region of North Carolina. Fire, hurricanes, or human activities (for example, clear-cutting) may return the forest habitat to one or another of these early stages of succession; thus, the cyclical process continues. The birds that inhabit the open areas move about to take advantage of these changes. If something disrupts the cycling, the populations of these open land specialists decline. Our Jordan Lake bird count data reveal just such declines. 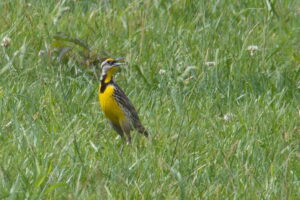 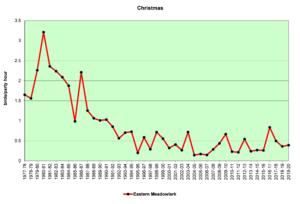 Eastern Meadowlarks, related to North American blackbirds and orioles, are birds of open grasslands. As Figures 2 and 3 show, this species is in decline in our count circle, both in the Spring Bird Count (SBC) data and the Christmas Bird Count (CBC) data. Meadowlark populations are declining throughout their range in eastern North America (Jaster, et al., 2020), and the decline in our area epitomizes their general decline. Meadowlarks build their nests on the ground in open grasslands, pastures, and hay fields. If these areas are mowed early in the breeding season, the nests are destroyed. And as cities and towns expand into these areas, the meadowlarks lose more and more of their required habitat. 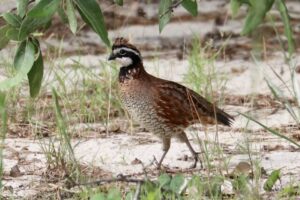 In the 1960s and 70s, it seemed as if Northern Bobwhites could be seen every time someone went into the appropriate habitat here in the Piedmont of central North Carolina. These birds of open lands, agricultural fields, and early successional, open woodlands were abundant. Their onomatopoeic call was a regular accompaniment to any morning bird walk. But as the graphs in Figures 5 and 6 show, in the early 1980s, the Bobwhite population began a precipitous decline. By the early 2000s, our counters considered themselves very lucky to find even one of these beautiful quail. 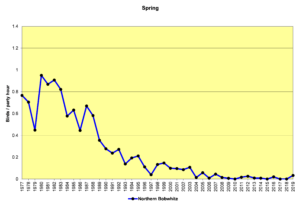 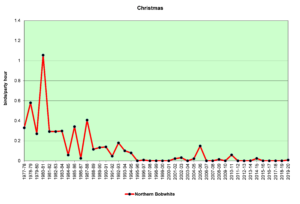 This population decline was not limited to our region; it occurred throughout the Bobwhite’s range all over North America (Brennan, et al., 2020). Various explanations have been proposed:

Whatever the causes, the population decline of these quail in our count circle mirrors the continental decline. 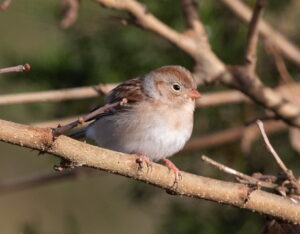 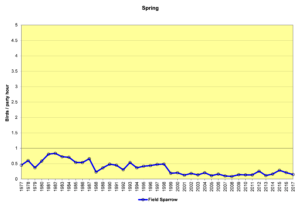 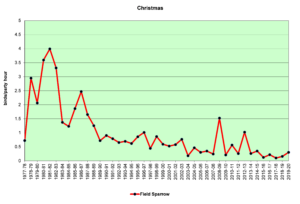 Field Sparrows are birds of early successional second growth forests and shrubby fields. As young forests and fields mature into more dense woodlands, they are no longer suitable habitat for these sparrows. As mentioned above, this succession is a normal occurrence in nature. But if these areas are cleared for agriculture or human habitations, they are also lost to this species. As Figures 8 and 9 show, Field Sparrows, like the preceding two species, are also in decline in our count circle. The fact that they used to be more common here in the non-breeding season was due to an influx of migrants from the northern part of their range. Since these sparrows are declining throughout their range, this winter influx no longer occurs to the degree it once did (Carey, et al., 2020). 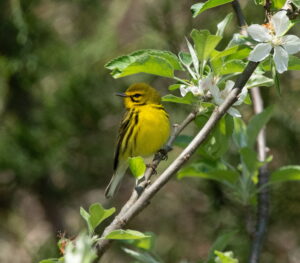 This beautiful warbler is another species that lives in shrubby fields and early successional woodlands. It breeds throughout eastern North America but migrates to southern Florida and islands in the Caribbean for our winter months. 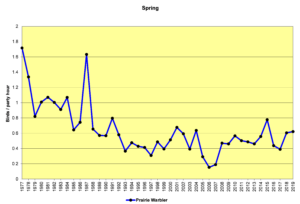 Again, as with Field Sparrows, when early successional habitat matures into forest, is converted to agricultural land, or is cleared for human housing, it is lost to this species for breeding. In addition, Prairie Warblers may also be under stress in their winter range (Nolan, et al., 2020). 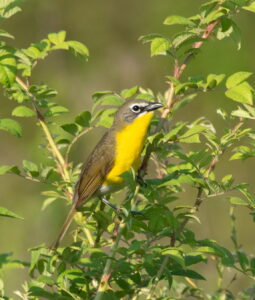 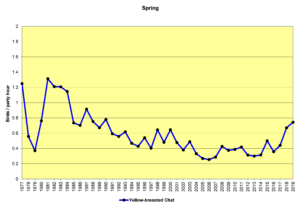 The Yellow-breasted Chat used to be classified together with the North American wood warblers like the Prairie Warbler. However, many aspects of its physiology, anatomy, and behavior led ornithologists to consider the idea that it was not a warbler. And now that we have genetic evidence from genomic studies, it is clear that this is a bird unto itself. It has recently been reclassified into its own family, a family of one species world-wide. Chats are migratory, breeding in our area and wintering in Central America. In our part of North America, Chats prefer similar habitats to those of the preceding two species. And they are similarly showing a decline in numbers in our counts. In other parts of their range, they can take advantage of more arid conditions or even mangroves and second growth tropical forests in their wintering grounds. Apparently, the local decline that we have seen is not the case in other parts of its range (Billerman, 2020).

In the succession of plants described above, the early successional stages ultimately give way to closed canopy forests. A typical scenario in our area is that loblolly pines or eastern red cedars are the pioneering trees in this process. Pine seedlings germinate and grow very quickly in full sun in abandoned croplands and rapidly dominate the landscape. Cedars are a bit slower, but often come to dominate land that was used for grazing. Why the difference? Grazing animals like cattle will eat pine seedlings but seem to avoid baby cedars. No grazers, pines get the upper hand; grazers, cedars win out.
In either of these situations, shade tolerant, slower growing deciduous trees (oaks, maples, hickories, etc.) can germinate and grow up under pines and cedars. Eventually, the deciduous trees replace the conifers and the ‘climax’ forest is dominated by these broadleaf trees. 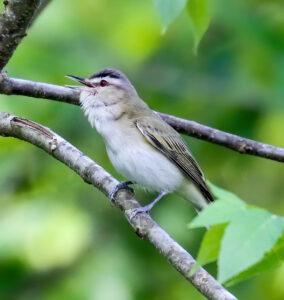 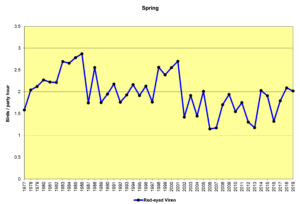 The Red-eyed Vireo is a relatively nondescript, insectivorous species of the deciduous forest canopy, and perhaps the most abundant bird in that habitat in eastern North America. During the breeding season, males sing almost incessantly from dawn into the afternoon. Walk along a forest trail in May, and you will almost certainly hear the rather monotonous 2- or 3-note phrases of this species. Though the songs seem monotonous to the human ear, any given male Red-eyed Vireo may have as many as 50 different phrases in his repertoire (Cimprich, et al., 2020).

Though these vireos are abundant in our local forests, there does appear to be cause for some concern in parts of their range (Cimprich, et al., 2020). North American Breeding Bird Survey (BBS) data show an overall positive trend in vireo numbers (an increase of 0.75% per year over the past 50 years). However, at the southern limits of their range (Texas and Florida), vireos are decreasing in abundance. It looks like our data from central North Carolina (Fig. 15) suggest a trend that is similar to what is being seen further south. This is definitely a trend worth watching. 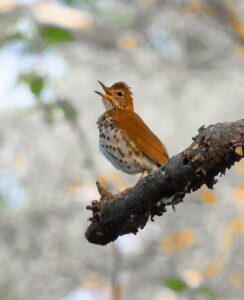 The male Wood Thrush is a remarkable singer. He has a syrinx at the base of his trachea, positioned just above where the windpipe splits into two branches, the bronchi. By regulating the airflow in each bronchus independently (both inhaling and exhaling, as a human harmonic player does), he can produce two sounds at the same time—in essence, singing a duet with himself. His rich, flute-like song is one of the most beautiful sounds emanating from the eastern deciduous forest during the breeding season. (For more detail on how all this works, click here for my blog article called Can You Sing a Duet with Yourself?) 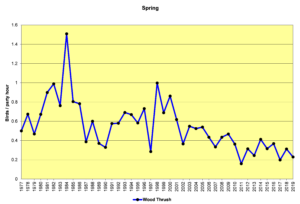 Unfortunately, the Wood Thrush’s role in the dawn chorus has become less and less common since the 1970s (Evans, et al., 2020). This population decrease is widespread, both in the thrush’s breeding range in eastern North America and in its winter range in Central America. The decrease we see in our data (Fig. 17) reflects the larger picture. Thrush populations typically decline when forest patches become fragmented, even if the total forest area remains the same. Birds around the periphery of a given patch suffer the most predation, while birds living in the interior part of a given patch are the safest. Smaller forest fragments have more edge and thus invite more predation of birds like thrushes. Populations are further threatened by Brown-headed Cowbirds (Molothrus ater), who find it easier to parasitize thrush nests in these smaller forest fragments as well.

The declining populations of the species discussed above are mostly symptomatic of more widespread declines of these species throughout their ranges. The data from our bird counts mirrors and supports the data from other sources like the North American Breeding Bird Survey and various state breeding bird atlases. In general, these declines appear to be the result of changes in land use practices either locally or in the wintering ranges of these species. Typical environmental changes include:

An example of these changes in the Jordan Lake Count Circle is the expansion of housing and commercial development in the eastern part of the circle. Of course, the building of Jordan Lake itself resulted in major loss of riparian, river bottom habitat in favor of the lake and associated wetlands. Our data do not reach far enough back into the pre-lake days to show the results of those changes.